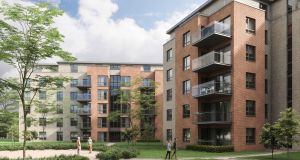 Twinlite’s 376-unit rental scheme in Clongriffin in north Dublin which will be rented out and managed by a new smart online platform, vestaliving.

A new smart housing platform, which allows tenants to view apartments, sign leases, pay rent and even manage their properties entirely online, has been launched by property development company Twinlite.

The group’s vestaliving.ie site will be used to rent out and manage the first 40 apartments of its One Three North scheme in Clongriffin, north Dublin. A further 336 apartments at the same scheme will be leased via the site over the next six months.

“The key difference between us and a typical property management company is that we’re putting the entire rental process online,” said Rick Larkin of Twinlite and executive director of Vesta, which will operate the site.

“Somebody can go online, view the apartment, see the floor plans, sign the lease and get a digital key for the apartment without ever having to interact with anyone or go to a viewing and vie with 10 others for the property,” he said.

Starting at €1,990 for a two-bed apartment, rent will include utility bills, up to a limit, refuse collection, broadband and TV.

“It’s a kind of service-plus arrangement that you get in the US, where everything outside of your own hall door is taken care of,” Mr Larkin said. “So there’s onsite staff, there’s a gym, there’s a cinema and a large dining area in the basement for parties.”

After developing the Clongriffin site, Twinlite sold it last year to investment firm Tristan Capital in a deal said to be worth €130 million. As part of the transaction, Twinlite will manage the scheme through the vestaliving website.

Mr Larkin said Twinlite and Tristan Capital were jointly involved in the development of two other sites in Dublin and he expected approximately 1,100 apartments to be leased via the site over the next two years.

“Our long-term aim is to design, build and manage 5,000 apartments across Dublin,” he said. “Vesta will help to meet the demands of Ireland’s growing population.

“We will be investing €300 million in bringing brand new, high-quality homes to the market that are purpose-built for renting, homes that Ireland desperately needs,” he said.

Mr Larkin said institutional investors or so-called “cuckoo funds” were not the cause of high rents in Dublin and were the only ones capable of funding the housing infrastructure required to meet demand.

Ireland has benefited from foreign investment in so many areas of the economy, he said, and there was no reason why housing should be any different.

“Ireland’s legacy private-landlord model is not keeping pace with renters’ demands,” he added.