Developer row could lead to part-demolition of IDA office 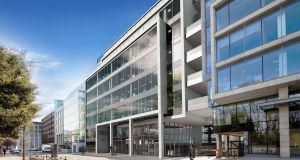 Three Park Place on Upper Hatch Street, Dublin 2, is one of the most high-profile offices in the city centre.

A row has broken out that could lead to the part-demolition of one of the most high-profile offices in Dublin city centre, which is home to the offices of IDA Ireland and several large companies.

The building, Three Park Place on Dublin’s Hatch Street, is at the centre of a legal action lodged last week by a company linked to Johnny Ronan’s Ronan Group Real Estate against a subsidiary of the developer, Clancourt.

According to the endorsement of claim given to the court last week, Mr Ronan’s company is alleging that Clancourt has unlawfully interfered with a right of way, understood to be a side street between Hatch Street and Adelaide Road. Mr Ronan owns a building adjoining the side street, and claims that the value of developing that building has been negatively impacted by the alleged encroachment.

The endorsement of claim, which also seeks damages for deceit, nuisance, trespass and misrepresentation, is seeking an order to “reinstate” or make provision for the plaintiff to access the right of way. It is understood that a reinstatement would require the demolition of a section of the Clancourt building which the RGRE company will argue blocks the right of way.

The court documents also show Mr Ronan’s company is seeking details of how much money Clancourt has made from the building so far, as well as an order that payment of some of this money be made to the plaintiff.

Alongside the IDA, tenants of the building include “Big Four” accountancy and consultancy firm Deloitte, as well as a company part-owned by Spanish financial services giant Santander, which spent a reported €3.5 million on the fit-out of the 21,000sq ft office.

A website for the building at Three Park Place, which was opened in 2017, boasts that it was at “the heart of the prestigious National Concert Hall Quarter”, and was “a location for others to be envious of”. The defendant in the case is Lisrua Unlimited, a company controlled by Clancourt.

The owners of Clancourt, the Kenny family, control much of the surrounding property adjoining the office buildings, including the former Crawdaddy and Tripod music venues located in the old Harcourt Street train station. They purchased the venues from the late founder of Electric Picnic, John Reynolds, who died this year. A spokesman for the company said it had no comment when contacted about the case on Monday.

Mr Ronan has taken several high-profile court actions in recent years in an effort to maximise the value of his companies, including an attempt to challenge Dublin City Council’s decision not to allow him put extra floors on the so-called Salesforce Tower in Dublin’s docklands.

However, this attempt failed and the company linked to the developer was ordered to pay the local authority’s legal costs.