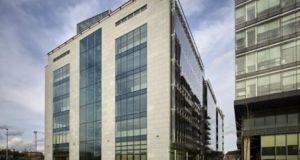 The amount of vacant office space available in Dublin is at its lowest since mid-2002, according to new figures.

Data from Cushman & Wakefield shows the level of “immediately available” office space fell 31 per cent annually in the third quarter to 329,450sq m, a level not seen since the early 2000s.

Furthermore, net of signed and reserved space, the vacancy rate fell to a new low of 5.1 per cent in the three-month period under review, the company said.

The take-up of office space in the capital overall reached 62,400sq m in the third quarter, the figures show.

Leasing activity totalled 185,600sq m in the first nine months of the year, marginally ahead of the same period last year.

Unsurprisingly, tech companies continue to be the most active sector in terms of office take-up, accounting for 38 per cent of deals in the year to date. The financial sector followed, absorbing a further 13 per cent. The flexible office sector continues to grow, despite the recent travails of WeWork, and while a small number of operators continue to dominate the sector, new operators have entered the market in 2019. The sector accounts for 11 per cent of take-up in 2019 to date.

The standout transaction of the third quarter, according to Cushman & Wakefield, was the occupation by the IDA of about 10,700sq m at Three Park Place on Upper Hatch Street in Dublin 2.

Other deals that bolstered take-up during the quarter included AIB occupying 5,250sq m at Block 2 in Heuston South Quarter, while Google increased its suburban footprint with the occupation of 4,500sq m at Blackthorn House in Sandyford.

Total spend reached €1.24 billion in the third quarter and stands at €3.05 billion for the first nine months of 2019.

Offices made up 38 per cent of investment turnover in the third quarter, with private rented sector assets accounting for almost half of all spending.

Dublin led activity in terms of location, making up 89 per cent of third-quarter turnover, across 34 transactions.

The average lot size in the market overall was €25 million, which is ahead of recent quarters and significantly larger than the five-year average of €14.5 million.

At the end of the third quarter, there was a total of €1.45 million worth of assets on the market. Of this, €956 million was either sale agreed or under negotiation.