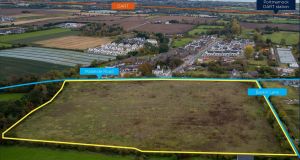 An aerial view of the Kinseal site shows its key location on the Malahide Road.

Agent Savills is guiding a price of €8 million for a 6.4 hectare (16-acre) site with potential for residential development in Kinsealy in north county Dublin.

Located directly in the centre of Kinsealy village on the Malahide Road, the majority of the site is zoned “Rural Village”, allowing for the delivery of up to 85 new homes and a new village square.

The sale of the land is being conducted on the instruction of Declan McDonald, receiver of Alhans Limited, a subsidiary of Johnny Ronan and Richard Barrett’s now-defunct Treasury Holdings.

The rural village zoning relates to about 4 hectares (10 acres) of the site, while a further 1.9 hectares (4.7 acres) is unzoned allowing for a significant element of open space or an opportunity for rezoning in any future development.

The site had a previous planning application for 81 units (all three and four-bedroom houses) refused pending the outcome of the Kinsealy Local Area Plan (LAP) and a transport study, both of which are now completed.

The Kinsealy Local Area Plan was adopted in 2019 and is prescriptive in terms of what Fingal County Council wants developed on the subject site, which should make the planning process straightforward for the purchaser.

Kinsealy village is located 11km north east of Dublin city centre and 4.2km south of Malahide village. The village is characterised by mature housing with amenities including a school, church, petrol filling station and a small business centre.

The subject site is located immediately beside the Abbeville estate, which is best known as the former home of the late Taoiseach Charles J Haughey, and within close proximity of the neighbouring seaside villages of Portmarnock and Malahide. Swords and Dublin Airport are located just over 5km from the property.

In terms of public transport, Dublin Bus operates the route 42 through the centre of the village while Portmarnock Dart station is located 2.3km from the subject property. The Dart reaches Connolly Station in 20 minutes and Pearse Station in 25 minutes respectively. The M1 and M50 are both within easy reach by car.