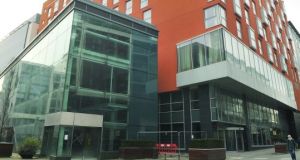 An Austrian investor has bought the Tallaght Cross hotel in west Dublin, which was developed by Nama-bound builder Liam Carroll as the last boom ended in 2008, and which has remained closed for almost a decade.

Businessman Thomas Roeggla, who has assembled a portfolio of about 13 Irish hotels over the last five years, operating under the TMR Hotel Collection banner, intends to reopen the hotel early next year, creating about 70 jobs.

The 186-bedroomed Tallaght Cross hotel was sold to him by an unnamed private investor who bought it from Nama about four years ago. An associated apartment development was previously acquired from Nama by IRES Reit.

Mr Roeggla has assembled his TMR hotel portfolio, with properties mostly in regional locations, in conjunction with his local representative, Davy Real Estate. It manages his Irish investments using a tax-efficient Icav structure.

Most of TMR’s hotels are managed by Windward Management, run by former Gresham hotelier, Patrick Coyle.

Mr Roeggla’s other Irish hotels include the Mount Wolseley golf resort in Carlow, the Cavan Crystal hotel, the Connemara Coast in Galway, and the Aghadoe Heights hotel and spa resort in Killarney.

Earlier this year, TMR also purchased the Harvey’s Point hotel in Donegal and the Plaza hotel, also in Tallaght. TMR says its three Irish purchases in 2019, including the Tallaght Cross, will comprise a total outlay of about €60 million including acquisition costs and further investment.

“Over the coming months we will implement a multimillion euro investment programme at our Tallaght Cross and Plaza Tallaght hotels which we see as a major vote of confidence in the area and a substantial boost to tourism and the local economy,” said Davy Real Estate director, Eimear Fox, who is also a director of TMR Hotel Collection.