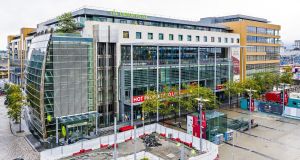 The Point Square scheme is located next to the Gibson Hotel (not included in the sale). 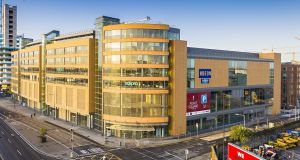 The Point Square portfolio includes a multi-screen cinema, which is fully-let to Odeon Cinemas

The ongoing boom in office and residential accommodation in Dublin’s north docklands is set to spur the interest of a wide range of international investors in the upcoming sale of Point Square.

Agent Savills Ireland is expected to bring the retail-led portfolio to market this September at a guide price of about €100 million.

Verizon and Voxprooperate from Point Square, while the current food and beverage operators within the scheme include Starbucks, Eddie Rockets, Ruby’s, Freshii and Salad Box.

Also included in the portfolio is the Glassbox, a new purpose-built restaurant building of 2,217sq ft, which is under construction adjacent to the main Point Square complex.

While the fortunes of the original Point Village’s developer, Harry Crosbie, suffered during the recession, the economic recovery of recent years has served to transform the city’s north docklands into a destination of choice for investors.

The wider and now renamed Point Square development is home to Live Nation’s hugely-successful 3 Arena, which hosts more than 100 concerts a year, and the 252-bedroom Gibson Hotel, which is owned by German real estate investor, Deka Immobilien.

The Exo Building – which is under construction and due for completion later this year – is situated on-site and, on completion, will see the addition of 2,000 workers to the Point Square area.

The prospects for the Point Square portfolio have been enhanced further by the recent opening nearby of Ireland’s largest off-campus student accommodation complex. Built by developer Michael O’Flynn and global fund manager BlackRock, the Point Campus scheme comprises 966 bed spaces.

But while the proximity of that student population is significant in itself, it pales alongside the 115,000 people now living within the immediate vicinity of Point Square .