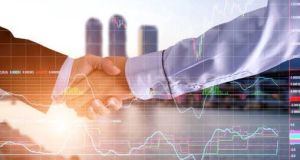 Managers will be in a hot state when volatility erupts. Fear causes them to hedge reactively and to overtrade, not appreciating just how much their hot emotional state is impacting their decisions. Photograph: Getty Images

Imagine the following scenario. Stocks are plunging around the world and your portfolio has been badly bloodied, losing 30 per cent of its value. Will you stay calm and stick to your long-term investment plan? Or will you panic and bail out? The question is worth reflecting upon.

Although stocks have been flying high in recent years, bear markets are an inescapable part of the investing process. No one knows when the next one will come, but come it will, so it makes sense to plan accordingly. Most readers will probably insist that they’ll hold tough, or even take a “buy low” approach and add more funds. Psychological research indicates it might be trickier than you think.

“Emotional time travel isn’t our species’ forte,” as GMO strategist and author James Montier writes in his book Behavioural Investing. “When asked in the cold light of day how we will behave in the future, we turn out to be very bad at imagining how we will act in the heat of the moment.”

Montier is referring to what behavioural economist George Loewenstein calls the hot-cold empathy gap. When we’re in a calm, comfortable place (a cold state), we find it hard to imagine how we will feel when we’re in a hot state. Fear, exhaustion, hunger, pain – it’s hard to anticipate their emotional impact in advance. Multiple experiments confirm this point. In one Loewenstein study students were asked how much money it would take to convince them to keep their hand in ice water for a period of time.

Those in a hot state – people who had just experienced the pain of ice-water immersion – demanded the most money for doing it again. People who had done the test a week before asked for less money, while the least amount of money was requested by those who had never done it before.

In other words we’re not good at pricing our own pain. In another Loewenstein study co-authored with behavioural finance expert and Predictably Irrational author Dan Ariely, young men were asked how arousing they found various sexual activities like bondage and spanking, and whether they would consider various sexual propositions – for example, having sex with a 60-year-old woman, having sex with someone you hated, and so on.

When non-aroused the average response was 36 per cent; when aroused this soared to 53 per cent.

The same hot-cold empathy gap emerges in various other studies. In one experiment 61 per cent of people about to exercise said that if they were lost without food or water, they would be more bothered by thirst; after exercising this rocketed to 92 per cent.

People become much more likely to consider unsuitable treatment options after being told they have cancer. Smokers who aren’t craving a cigarette underestimate how much they would value a cigarette when later in a high-craving state.

People who don’t own a particular object underestimate how attached they would be to it and how much money they would need to part with it. This empathy gap has obvious implications for money managers, says HSBC’s Adco Leung. Money managers are in a cold state in calm or benign markets; lulled into complacency. They leave more positions unhedged and underestimate how much they might be affected by peer pressure when market sentiment turns sour.

On the flip side, managers will be in a hot state when volatility erupts; fear causes them to hedge reactively and to overtrade, not appreciating just how much their hot emotional state is impacting their decisions.

This is echoed by Montier. In calm markets you might say you will sell a stock when it reaches $x or if it ever has a profit warning. “However, when the stock reaches $x or has a profit warning, we suddenly find our decisions are very different from the ones we set out to implement.” Obviously, the hot-cold empathy gap also affects ordinary investors. In 2015, US firm Wealthfront examined cases of clients who closed their accounts during down markets. Before they opened their accounts fewer than 5 per cent had said they would sell their entire portfolio if markets suffered a correction and almost half said they would add more funds. Saying you will be greedy when others are fearful is easier said than done, says Morgan Housel of the Collaborative Fund, because we underestimate how much our views and goals change when markets fall apart.

If you imagine how you’d respond to stocks falling 30 per cent, you picture a world where everything is like it is now except stock valuations, which are 30 per cent cheaper, says Housel. However, downturns don’t happen in isolation.

“The reason stocks might fall 30 per cent is because big groups of people, companies, and politicians screwed something up, and their screw-ups might sap my confidence in our ability to recover,” writes Housel. “So my investment priorities might shift from growth to preservation.”

It is, Housel cautions, “difficult to contextualise this mental shift” when all is well and you’re in a calm, cold state. What can investors do to mitigate against this unfortunate tendency?

Farnam Street blogger Shane Parrish, who is something of a guru to many on Wall Street, advocates the use of decision journals where you track your mood as well as your thoughts. Taking a quick pause to note if you are in a hot or cold state as you make a decision can make a difference over time, he says.

Nobel economist Richard Thaler and Dan Ariely both recommend investors minimise how often they look at their portfolio. Some investors may be conflicted by the idea of imposing limits on their own freedom of choice but it may well guard against bad decisions, says Ariely.

That is echoed by James Montier, who recommends investors “prepare, plan and pre-commit to a strategy”. Having “simple but non-negotiable precommitment style trading rules” – for example, a rule that you must sell a stock once it has a profit warning – “removes the conflict of an empathy gap by removing the possibility of a choice”. Still, the hot-cold empathy gap is “far harder to overturn” than other biases, says Montier. Indeed, one under-appreciated lesson from the research is that we should be more understanding towards bad decisions – whether made by oneself or by others – made in hot emotional states.

Morgan Housel holds the “unpopular view” that most of us underestimate the extent to which we would have behaved similarly to those who got caught up in the housing bubble that led to the 2008 global financial crisis.

“ ‘Housing prices in relation to median incomes are now above their historic average and typically mean revert’, is a statistic,” says Housel. “‘Jim just made $300,000 flipping homes and can now retire early and his wife thinks he’s amazing’ is a story.” That story has a strong emotional pull. Resisting those emotions, trying to cool down when you’re in a hot state, is trickier than we like to think.

NTMA to raise billions of euro for State in bond sale to meet costs of Covid-19 crisis 10:36
Coronavirus: Journal Media to cut pay by up to 20 per cent 10:14
Euro zone factory activity crashed in March as coronavirus spread -PMI 09:53
Dublin diamond explorer receives six new licences in Botswana 09:40
Two-thirds of Lufthansa’s staff to shorten work hours due to coronavirus 09:17