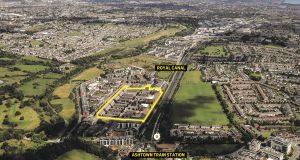 CGI of development along the Royal Canal

A development site with planning permission for 296 apartments and houses along the Royal Canal at Ashtown, Dublin 15, is to be offered for sale by Nama at €22 million – a long way from the €70 million it made in September 2006, some two years before the property crash.

John Swarbrigg of Savills is handling the sale for the receiver, Simon Coyle of Mazars, in the expectation that the purchaser will proceed without delay with the development of 130 three- and four-bedroom terraced houses and 166 one-, two- and three-bedroom apartments.

The Rathborne site, extending to 4.975 hectares (12.29 acres), was sold during the boom to the once powerful Capel Developments by Joe O’Reilly’s Castlethorn Developments after it had completed and sold about 1,400 apartments in the same area.

O’Reilly’s construction company is now back in the Ashtown area building more apartments as well as being involved in several high-profile developments in Ballsbridge and other sites in south Dublin.

Apartments in the Ashtown area are in demand because of the current rental shortage as well as their proximity to the Phoenix Park, Blanchardstown Town Centre and the Ashtown railway station.

There is also a bus service between Ashtown and the city centre as well as to and from Blanchardstown, Cabra and Castleknock.

Savills New Homes Division estimates that three-bedroom houses on the Rathborne site should sell for €385,000, while four-bedroom units should make €480,000.

There is an immense shortage of rental accommodation in the Ashtown area, according to Savills.

Capel Developments had valued two-bedroom apartments at close to €400,000 when it acquired the site in 2006. Savills says that while the current planning permission will have great appeal, a feasibility study undertaken by Plus Architecture shows a potential to switch to more than 700 apartments in an all-apartment scheme as a result of new planning guidenlines.

In addition to Castlethorn and Capel Developments, Sean Mulryan’s company, Ballymore, has played a major role in developing new houses and apartments in the adjoining Royal Canal Park in Rathborne.