Residential sites in Cabra and close to Newcastle village 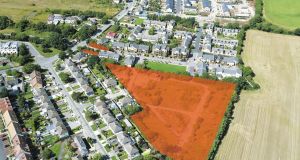 Agent CBRE is bringing two residential sites to the market this week.

The first, on Fassaugh Avenue in Cabra, Dublin 7, extends to 1.21 acres, is guiding €6 million and would suit a high-density residential scheme.

Under the Dublin City Development Plan 2016–2022, it is zoned predominately Z1, “sustainable residential neighbourhood”, with a small portion to the front zoned Z3 or “neighbourhood centre”.

There is full planning permission in place for a student housing development with 194 bed spaces split between two blocks and ancillary retail space.

A feasibility study, prepared by BDP Architects, suggests the site has potential for a 140-unit, build-to-rent scheme with ancillary residential amenities while another study points to the feasibility of a co-living development of more than 250 bed spaces. Both schemes would be subject to securing planning permission.

The site, about 3km northwest of O’Connell Street, is within 600m of Cabra Luas stop which has a direct service to the city centre.

DIT’s new campus at Grangegorman is also within walking distance while DCU is about 3.5km away.

CBRE’s second site extends to 3.4 acres at Newcastle in Co Dublin and is being made available, on the instructions of receiver Brendan O’Donoghue of RBK Chartered Accountants, by way of licence agreement. This means site payment is made on a piecemeal basis as opposed to one lump sum.

The site, which adjoins the successful Aylmer Heath residential development, is “shovel-ready” with a five-year planning permission for 49 houses in a mix of two- and three-bed semi-detached, detached and terraced units ranging in size from 110-121sq m (1,184-1,302sq ft).

Dublin city centre is about 18.6km away and accessed via the N7 which is 3.4km south of the site.

Darragh Deasy of CBRE says the site offers developers the chance to deliver 49 houses in what is an “established and growing residential location”. Due to the lot size, planning permission and payment structure, he says he believes “this asset will appeal to a wide variety of developers and house builders”.