Man avoids jail after agreeing not to interfere with receivership property

Judge adjourns proceedings to see if orders are complied with 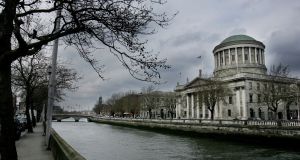 A Co Wexford man has avoided being sent to jail after agreeing before the High Court to comply with orders not to interfere with a property in receivership. Photograph: Aidan Crawley

A Co Wexford man has avoided being sent to jail after agreeing before the High Court to comply with orders not to interfere with a property in receivership.

Ms Justice Leonie Reynolds had previously warned Arthur O’Neill, unless he abided with orders regarding a property at Askinvillar Upper, Kiltealy, Enniscorthy, she would have no option other than to send him to jail for contempt.

Receiver Ken Fennell brought proceedings against Mr O’Neill claiming he was in contempt of an injunction granted last March restraining him entering or interfering with the property. The matter had been adjourned to Tuesday to allow Mr O’Neill consider his position and obtain legal advice.

Mr O’Neill gave a sworn undertaking before Ms Justice Reynolds to comply with the orders.

He had raised concerns about tenants whom he said had leases in respect of the property but Ms Justice Reynolds said any issue regarding any purported lease or leases was a matter for another day and she was only concerned in dealing the issue of contempt.

The judge adjourned the matter to Friday to see if the orders are complied with.

Mr Fennell, represented by John Kennedy, had claimed Mr O’Neill of Marshallstown, Enniscorthy, was in contempt of court and has brought proceedings seeking Mr O’Neill’s attachment and committal to prison.

Mr O’Neill and others have re-entered the property and have prevented the receiver taking possession, it was claimed. It was also claimed the property, without the receiver’s consent, has been offered for rent on websites popular with tourists to rent for over €250 per night.

Following his appointment by Promontoria (Finn) Ltd as receiver over the property in 2017, the receiver claimed he has been prevented advancing the receivership by Mr O’Neill.

The receiver, who was appointed over an alleged failure to satisfy a demand to repay €2 million arising out a loan advanced to Mr ONeill and his wife, secured an injunction against Mr O’Neill preventing him from interfering with the property. Mr O’Neill appealed that order, but there is no stay on the order.

In breach of those orders, Mr Fennell claimed Mr O’Neill re-entered the property and, along with others, the defendant continues to exercise control over the property. Mr Fennell also claimed that, earlier this month, a barricade of vehicles and people including supporters of Mr O’Neill, and including members of the Yellow Vest movement, was placed outside the gate of the property.

1 Irish people like nothing more than being bribed with their own money
2 Being in Nama regarded as stigma in UK, O’Flynn tells court
3 Climate apathy in Northern Ireland could impact on the Republic
4 Hogan warns Britain on US trade deal as EU set to impose tariffs
5 Construction body calls for loan scheme to help first-time buyers
6 The Irish economy is thriving but if you’re not feeling it – here’s why
7 Greencore investors urged to spurn Coveney’s €315,000 pension
8 Barclays to cut 100 senior roles as lender seeks to rein in costs
9 EU considers five-year ban on facial recognition tech in public areas
10 Fast-growing frozen food group has a strong appetite for success
Real news has value SUBSCRIBE