Eight-acre site has potential for more than 400 apartments 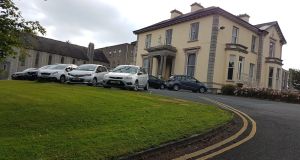 The Carmelite order is set to secure up to €35 million from the sale of eight acres of land attached to its student and novitiate house at Ballinteer in south Dublin.

Irish house builder Lioncor Developments is understood to be closing in on a deal to acquire the site at Gort Muire following a targeted off-market sales process handled by agent Bannon.

Spokesmen for both Lioncor and Bannon declined to comment on the matter when contacted by The Irish Times.

While the land at Gort Muire is being sold without planning permission, a feasibility study prepared in advance of the sale suggests it could accommodate more than 400 apartments comprising a mix of one-, two- and three-bed units along with retail space.

The site of the proposed development is located to the rear of the Carmelites’ house at Gort Muire and adjacent to St Tiernan’s Community School. It also sits within close proximity to the 636 apartments developed at Wyckham Point and Wyckham Place in the mid-2000s by Gerry Haughey’s Dorville Homes and Galway-based O’Malley Construction, and is within a short distance of Dundrum Town Centre. Both schemes are located on lands which previously formed part of the Carmelite order’s original 50-acre Gort Muire estate.

The Carmelite order acquired Gort Muire – or Gortmore as it was then known – in 1944 from a Mr B St George Lefroy for £12,000. Prior to their move to Dundrum, the order’s priests and students had been living since the early years of the century at Ardavon on Orwell Road in Rathgar.

As the outbreak of the second World War had suspended the sending of students to Rome to study theology, the Carmelites required more room for their house of studies. The order’s acquisition of Gortmore was approved by the then archbishop of Dublin, Dr John Charles McQuaid, and the Curia in Rome on March 12th, 1944.

Outside of Dublin, Lioncor is developing the Leana Theas estate in Knocknacarra, Galway, and Castlebrook Manor in Castletroy, Limerick.