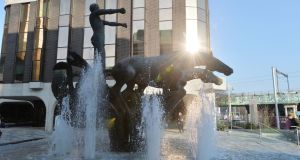 Irish Life, the largest life insurance and pensions group in the Republic, has dropped out of the race to acquire Dublin-listed property group Green Reit, narrowing the field of bidders to three a little over a week before a deadline for final offers, according to sources.

Californian real-estate giant Kennedy Wilson; a German company, speculated to be the commercial property unit of Dekabank; and a UK-based firm with US connections are understood to be leading the remaining three parties circling Green Reit.

A spokesman for Irish Life, which is owned by Canada’s Great-West Lifeco, and a spokeswoman for Kennedy Wilson declined to comment. Representatives for Dekabank and Green Reit didn’t respond to requests for comment.

However, the board of the company put it up for sale three months ago after concluding, on carrying out a strategic review, that its share prices had been “subject to a material and persistent structural discount to its net asset value per share over three years”.

Shares in the company have surged by almost 20 per cent since then to €1.83 to bring them into line with the value that Green Reit put on its assets on a net basis at the end of December. The company currently has a market value of €1.284 billion.

Final bids for Green Reit are due on July 25th, six weeks after initial proposals were submitted.

Goodbody Stockbrokers analysts, including Colm Lauder, Cian O’Sullivan and Eamonn Hughes, noted in a report on the commercial property market, published on Tuesday, that the first round yielded strong interest from a diverse range of investors.

This was driven by the fact that the company is sitting on a “mature, prime income-producing Dublin city centre office portfolio”, combined with development potential at its key suburban offices location in Central Park in Sandyford, south Dublin, and its Horizon Logistics Park near Dublin Airport, they said.

The group’s portfolio comprises 17 properties totalling 2.5 million sq ft of space that is delivering an annual rent role of about €73 million.

“The largely recovered Dublin market will remain stable through [the second half of 2019] with little to no growth expected for rents and yields,” said the Goodbody analysts. “However, a buoyant occupier market means lease terms may strengthen further. Brexit moves are providing a minor boost to demand.”

Green Reit has also seen beef magnate Larry Goodman build up a 2.3 per cent stake in the company in recent weeks.