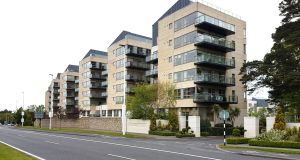 The growing appetite of international investors for Dublin’s private rented sector (PRS) saw it accounting for a record 55 per cent of all property investment transactions in the capital in the second quarter of 2019.

That’s according to a new report on the residential property investment market from agent Hooke & MacDonald.

Four of the five largest Dublin property investment transactions in the three-month period to the end of June were PRS sales, the report finds. The increasing focus of institutional investors and funds on residential rental accommodation saw the office sector, which had been dominant for the past several years , pushed into second place at 29 per cent.

While eight PRS deals with a total value of €615 million were contracted in Dublin in the second quarter, just one of these was a new-build portfolio. The sole new-build transaction saw the sale by the Cosgrave Group of 214 apartments at the Fairway, Cualanor, Dún Laoghaire to a real estate fund managed by Deutsche Bank subsidiary, DWS, for €108 million.

The second of these major deals saw Ires Reit agreeing to the €285 million purchase of the 815 homes in the XVI (16) portfolio from Marathon Asset Management. Distributed across 16 high-end developments, the portfolio largely comprises the 588 apartments for which Marathon paid Nama €120 million in 2015 as part of the Project Plum loan sale process.

In the year to date, Hooke & MacDonald’s report finds that some €703 million in sales were conducted across 12 schemes in the private rented sector. The figure represents 41 per cent of the €1.72 billion in property investment sales completed in the capital in the first half of 2019. The office and retail sectors meanwhile accounted for 35 per cent and 11 per cent of sales respectively.

In terms of upcoming sales activity, the report’s authors say there are 18 residential investment transactions with a combined value of €516 million currently at sale agreed stage in Dublin. Six of these deals involve new-build developments, comprising 696 units, while the other 12 are accounted for by existing stock comprising 518 units.

Looking at the pipeline for the delivery of new apartment stock, Hooke & MacDonald notes that the increase in both the number of planning applications and approvals has not led to an equivalent increase in the commencement of developments. The report cites as the cost of land and finance, coupled with planning delays as constraining factors, along with taxes and levies on new construction. New increased water charges and a delay in the supply of water are also emerging as additional impediments for many sites, the report’s authors say.

Responding to concerns that the growth of the private rented sector is having a negative impact on the level of traditional home ownership in the capital, Hooke & MacDonald says the cost of building apartments in Dublin has increased to the point where the owner-occupier and first-time buyer’s market can’t support the returns required to make projects viable.