DIT facility sold for over €5.5m to tourist accommodation provider 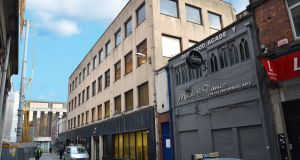 The sale of 6-12 Sackville Place saw interest from a range of developers, investors and hoteliers.

The DIT’s former premises at 6-12 Sackville Place in Dublin city centre has been sold to a tourist accommodation provider for more than €5.5 million. The figure represents a premium of 10 per cent on the €5 million price guided by agent Lisney when it brought the property to the market on behalf of the renamed TU Dublin (Technological University Dublin) last January.

While the sale of the premises was completed last week, it will remain in educational use by TU Dublin up until the relocation of its operations to its new Grangegorman campus in 2020.

Located next to O’Connell Street, the Sackville Place property comprises a mid-terrace mainly four-storey over basement educational building together with some single- and two-storey sections. The building has the benefit of excellent frontage to Sackville Place and is situated directly opposite the new €16 million Moxy Hotel (Marriott). The building extends to more than 2,004sq m (21,570sq ft).

The sale of the property attracted interest from a range of parties including developers, investors and hoteliers. O’Connell Street and its immediate environs have seen significant investment and development activity over the past year.