Property has undergone extensive renovations since purchase by the Prem Group 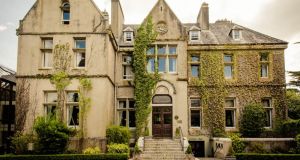 Cahernane House Hotel in Killarney, Co Kerry: All 26 rooms in the Garden Wing will be refurbished, while the Cellar Bar and lobby will also receive complete makeovers

The Cahernane House Hotel in Killarney, Co Kerry is about to enter the final phase of a major €6.5 million redevelopment by the Prem Group.

The hotel has undergone extensive renovations since it was purchased by Prem in 2016. The company said the work has been carried out with “a sympathetic eye” on keeping many of the original styles of the house.

The latest part of the project, at an estimated cost of €3 million, will result in a major refurbishment of all 26 rooms in the Garden Wing, while the Cellar Bar and lobby will also receive complete makeovers.

The initial phases of work involved putting on a new roof, as well as replacing all mechanical and electrical installations.

A planning application has also been lodged with Kerry County Council to build an additional 22 bedrooms and more public spaces, including an orangery.

Separately, Prem, which operates more than 45 properties throughout Ireland, Belgium, the Netherlands, France and Britain, is undertaking a €3 million renovation project at the Osprey Hotel in Naas, Co Kildare.