Irish retail back to ‘more normalised level’ of investment 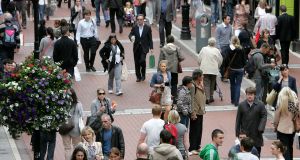 Commercial investment in Irish retail fell off something of a cliff in 2017, with the value of transactions for the first nine months of year down nearly 80 per cent at €321 million, according to property consultants CBRE Ireland.

This drop-off reflects the winding down of extensive deleveraging programmes by Nama and the banks, which had inflated the number of assets being traded in previous years. Three of the State’s largest shopping centres, including Dundrum Town Centre, exchanged hands last year.

“We’re now back to a more normalised level of investment spend,” says Marie Hunt of CBRE.

The figures could yet be boosted by the sale of The Square Tallaght, which is in the process of being sold to US private equity fund Oaktree for €250 million.

Of the completed transactions, Irish Life’s acquisition of the property that houses AIB’s principal branch office on Grafton Street for €50 million from German fund manager GLL Real Estate was the standout deal.

International property manager AEW also made its first significant foray into the Dublin market, buying the retail premises occupied by women’s fashion outlet Evans on Henry Street for €18 million, while the McDonald’s outlet and office premises on Mary Street was snapped up by New Ireland Assurance for €17 million.

The biggest regional transaction was the sale of Limerick’s Parkway Retail Park, which was also acquired by Oaktree from property firm Green Reit for €23 million.

Nonetheless, the value of transactions was way down on 2016. “It’s not a drop-off in retail spend per se but a drop-off in overall investment generally now that deleveraging has come to an end,” Hunt says. She notes that activity on the occupiers’ side remains strong.

Across the State’s big five shopping centres – Dundrum Town Centre, The Square Tallaght, Liffey Valley, The Pavilion in Swords, and Blanchardstown – there were about 30 big letting deals in 2017.

On Grafton Street, lingerie chain Victoria’s Secret this week opened its first Irish store in the space formerly occupied by BT2, while the company behind London’s celebrity hangout, the Ivy restaurant, secured the green light to open a new restaurant on Dawson Street.

Hunt says most of the State’s big shopping centres either have planning or are expected to seek permission to build in the coming months, “which dispels the myth that retail here is on its knees”.

Still, there’s another factor at play: namely the lack of prime retail space in Dublin, a recurring theme in the sector.

Occupancy levels on Grafton, Henry and Mary streets – the city’s main shopping thoroughfares – are currently 95 to 100 per cent. The two main out-of-town shopping centres (Dundrum and Blanchardstown) both have 100 per cent occupancy.

“What we lack in the city centre and in the main shopping centres are big-box units,” says Eoin Feeney of BNP Paribas.“If the likes of, say, a Uniqlo [the Japanese clothing giant] want to come into the Irish market today, there is no product for them. They can’t open stores.

“We need new development to attract new occupiers,” Feeney adds, “particularly in the city centre because Grafton Street is only so big, and the planners will not allow the amalgamation of units.”

The last big shopping centre developed in the city centre was Jervis Street in 1996. Before that it was St Stephen’s Green centre in 1988 and the Ilac Centre in 1981.

All this might be about to change, however, with a string of high-profile city centre developments in the pipeline.

The 5.3 acre site, bounded by O’Connell and Moore streets, has planning for a 130,000sq m, mixed-use scheme, with up to 82 retail units including a large anchor store.

Property investment firms Hines and Peterson, meanwhile, are awaiting planning for their Central Plaza scheme on the site of the former Central Bank building on Dame Street.

The proposed €75 million makeover will incorporate retail, restaurants and cafe uses at street and basement level.

The redevelopment of Arnotts, the city’s largest and oldest department store, will also make way for a large retail unit on Henry Street, while the plan for Clerys department store on O’Connell Street includes the refurbishment and extension of the Clerys Building.

If all this pipeline development comes to fruition, city centre retail could by augmented by 10 per cent.

According to CBRE’s Hunt, three core themes drive retail: the interplay between online and offline, including the emergence of the so-called branding emporium; the ongoing growth of food and beverage retail; and Brexit.

While most brands are witnessing a pick-up in online sales, Hunt says:that “it’s neither one nor the other, it’s neither physical nor online.

“Most retailers realise you need a combination of both. But what you’re using the store for is more of a branding emporium – retailers want people to go in and physically see the goods but ideally they want them buying online.”

Earlier this year, discounter Lidl used a temporary vacancy on Grafton Street as a branding emporium for its new Heidi Klum clothing line, with shoppers invited to go in and look at the goods without buying anything.

“A lot of retailers now realise the bulk of what they’re selling is online,” Hunt says. “Really, what they’re going after is not having 30 or 40 stories located in every big town in Ireland but looking at having a large store on Grafton Street or in Dundrum.

“There’s a concentration on being in the best possible retail location and then using that as promotion for the online presence.”

Her point is borne out by UK retailer Toys R Us, which this week announced plans to close a third of its UK stores, saying the warehouse-style stores opened in the 1980s and 1990s had proven “too big and expensive to run”, and that the focus was now on “newer, smaller, more interactive stores in the right shopping locations” was now the focus.

Another factor is the uncertainty around Brexit with big UK multiples pressing pause on expansion plans until they get a clearer picture of the post-2019 trading environment.

The proliferation of food and beverage outlets also continued, with Sprout & Co, Chopped, Bunsen, Krispy Kreme and Wowburger just some of the new businesses taking up prime locations. Trendy Mexican burrito chain Boojum is also opening a brace of new stores in Dublin, while coffee chains Costa and Butlers have also been busy.

Investment and pension firm Friends First recently acquired Kilkenny retail park and Globe retail park in Naas – partly on the basis that a pick-up in housebuilding will stimulate demand for household furnishings and white goods.

“Generally when you have an increase in housebuilding, you have people investing more in their homes,” says Claire Solon, head of property at Friends First.

However, she believes provincial retail won’t return to where it was before the crash because of the pick-up in online sales, which has changed the marketplace.