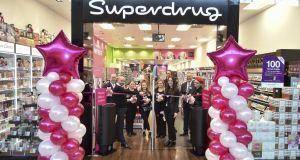 UK pharmacy chain Superdrug has opened its seventh Irish store as it eyes new locations to further expand next year.

The company’s newest offering in the Swords Pavilions shopping centre is the fourth Superdrug outlet in Dublin.

Another store is due to open in Arklow later this year and the company said that “further prime locations” are currently being sought for 2018 openings.

Some 15 new jobs were created in the 3,400sq ft Swords outlet which, aside from offering the company’s own brand range, will have a facility for “beauty treatments on the go”.

Commenting on the opening, Nigel Duxbury, Superdrug’s property director, said: “Republic of Ireland is an incredibly important chapter in the growth of Superdrug internationally and we are actively looking for prime sites in which to offer our unique mix of beauty and wellbeing to Irish customers.”

Superdrug currently has 794 stores across the UK in addition to its Irish outlets and is owned by the AS Watson Group which has a variety of brands - the majority of which don’t operate in Ireland.

1 ‘Saudi Arabia is where the opportunities will happen in future’
2 MSD buys Takeda biologics plant in Dunboyne
3 Data centres will force State to choose between climate and investment
4 State’s biggest landlord records 30% rise in rental income
5 Covid Tracker app throws spotlight on Google data harvesting
6 Why are markets booming when a crash is on the way?
7 Project to identify spare intensive care beds accelerated by pandemic
8 Stocktake: Is the shoeshine indicator flashing red for stocks?
9 Who owns private hospitals behind State’s €115m-a-month deal?
Real news has value SUBSCRIBE