An Post says it delivered more than 500,000 parcels last week to addresses in Ireland 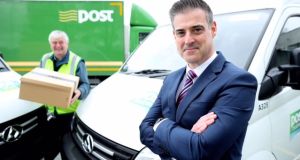 Garrett Bridgeman, managing director of An Post mails and parcels: “We were all set for a big online shopping surge round Black Friday and it didn’t disappoint.”

An Post parcel deliveries rose by 17 per cent last week versus the same period a year ago as Irish consumers took advantage of Black Friday and Cyber Monday online sales.

The company said it delivered more than 500,000 parcels last week, with about 50 per cent of the total volume originating in Ireland.

“We were all set for a big online shopping surge round Black Friday and it didn’t disappoint,” said Garrett Bridgeman, managing director of An Post mails and parcels.

Of the 50 per cent of parcels originating from overseas, more than 60 per cent was from the UK with the balance coming from across Europe, the US and Asia.

The figures show that there was a 21 per cent rise in toys and games delivered over the week compared to the same period a year earlier, while clothing items were up 15 per cent and homewares, up 14 per cent.

“The pre-Christmas push by e-tailers started earlier this year. The kids were barely back in school when the early discounts and special offers got under way. And there’s no sign of a let-up right across Europe, with strong volume and revenue increases everywhere, and smartphone becoming the main channel of choice for online shoppers,” Mr Bridgeman said.

1 Should my mam wait for house prices to drop before buying?
2 Covid-19 mortgage breaks: What’s the catch?
3 Almost 70% of home buyers to purchase within next year
4 Brother is dragging his heels as executor of uncle’s will - is there anything I can do?
5 Covid-19 takeover of private hospitals to cost insurers €180m
6 Revenue faces US drug company Perrigo over disputed €1.64bn tax bill
7 Dublin drops out of top 50 in ranking of best cities for start-ups
8 Consumer watchdog tests face masks to ensure they meet standards
9 Olympic nostalgia a reminder of Eurosport’s big play
10 Cheers: Conor McGregor's whiskey races up the sales chart
Real news has value SUBSCRIBE