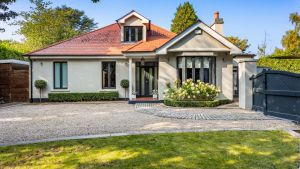 Mazemore, a 1930s bungalow on Torquay Road, similar to many other houses in Foxrock during the boom became a magnet for developers who were drawn to properties on large plots, considering them ripe for redevelopment in the sought-after upmarket suburb.

Mazemore became part of the Stokes family property portfolio and its vast garden was soon divided in two, creating a site to the rear while the bungalow, its red tiled roof glimpsed only from the road behind mature hedging, was renovated and extended.

By the time the current owners bought the dormer bungalow in 2015 (for €958,250 according to the Property Price Register) it was a receiver’s sale and the house, which had not been lived in for some time, required work.

The boom-time makeover, however, had been a quality one. So while the floors throughout needed to be returned to their best, they were solid smoked oak, the mosaic-tiled family bathroom just needed a clean up. The windows and new interior doors as well as the dramatic floor-to-ceiling wall width concertina patio doors in the kitchen were in perfect condition.

The four-bed 205sq m (2,205sq ft) family home required a rethink in terms of its interiors – its minimalist look, say its current owners, needed to be “warmed up”. They have done a very smart job, with details such as extensive use of panelling the hall and front reception room, warmer colours throughout, and reworking the open-plan rear extension so that the areas are more defined, with the kitchen and dining area opening into a seating area with custom-built shelving as a focal point.

Also in this rear extension is a room, probably intended as a library, but now used as a playroom. As it opens via double doors to the back garden it would also work well as an attractive home office.

On this level too is a formal reception room with a bay window, two double bedrooms and a family bathroom. A large utility room, fully fitted with extensive storage, opens to the rear and off the kitchen. It has been updated with new doors, painted a soft grey/green and new integrated appliances. The large island unit is topped with polished stone.

Upstairs there are two more bedrooms – the main one has a dressing room and a recently renovated en suite.

Considerable work has been done in the wide south-facing rear garden which was on different levels and so overgrown that when they moved in the children could hide in the long grass. Now a flagged patio runs across the rear and is level with the lawn, replaced with Astroturf which the owners have found to be a practical play surface for the children.

The garden wraps around to the side with one of the bedrooms opening out on to it. While Mazemore is very much a family home it might also suit well heeled downsizers with its downstairs bedrooms and bathroom and large living areas. There is parking to the front in the mature landscaped garden for two or three cars set behind electric gates

Mazemore is for sale through Hunters seeking €1.285 million.

Who's that lady? The extraordinary life of the Marchioness of Dufferin
10