Firm’s bid for €2.9m judgment against Ivor Callelly to be fast-tracked 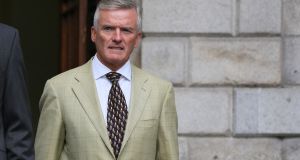 A High Court judge has said he was satisfied former junior minister Ivor Callely had taken steps to evade service of court proceedings relating to an action by a finance company suing him over €2.9million outstanding on loans.

Mr Justice David Barniville, when agreeing on Monday to admit the case to the fast-track Commercial Court, said it was quite clear Mr Callely was aware of the proceedings.

The judge has been told of attempts to serve notice of the proceedings on Mr Callely and that Mr Callely’s email account had been deactivated.

He was told the account was reactivated at the weekend when Mr Callely sent a letter to solicitors for the finance company saying he was not “physically, emotionally or mentally fit” to come to court.

Mr Callely and his wife, Jennifer Foley Callely, are being sued by a finance company for more than €2.9 million allegedly outstanding on loans to them in 2013 for property investment.

Everyday Finance DAC is seeking judgment against Mr Callely, Howth Road, Killester, and Jennifer Callely, St Lawrence Road, Clontarf, both Dublin, arising out of €2.4 million in loans advanced to them by AIB to purchase investment properties.

The loans were sold to Everyday Finance in 2018.

Cian Ferriter SC, for Everyday, told Mr Justice Barniville on Monday that emails had been sent to Mr Callely informing of the application to have the case against him admitted to the Commercial Court list.

Counsel said it appeared Mr Callely’s email account was deactivated and later reactivated and the letter from him was sent to Everyday’s solicitors.

In that letter, the former Fianna Fáil TD and senator, who was jailed for five months in 2014 for fraudulently claiming expenses from the Oireachtas, said he was involved in a horrific bicycle accident in west Cork last August.

He said he had suffered life-changing injuries including paralysis and also underwent spinal surgery.

Asking for an agreement to adjourn the matter, Mr Callely said he is currently a hospital weekday in-patient in receipt of rehabilitation.

He also said he wanted to put on record that, at no stage, had he been involved in a “running battle” with Everyday Finance or their representatives.

Ms Foley Callely, the judge was told, had lodged a replying affidavit in which she contended the issues involved are before the courts in another case.

Admitting the case to the Commercial Court list, Mr Justice Barniville said it was quite clear Mr Callely was aware of the proceedings and he was satisfied the papers were served on Mr Callely.

Referring to Ms Foley Callely, the judge said she has been totally up-front with the court and had at all times appeared before the court.The case will be heard in February next year.