Traffic infrastructure, housing problems and Brexit to blame for fall in sentiment 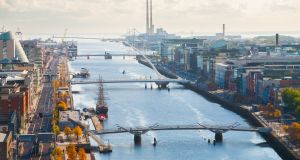 Dublin has become a considerably less attractive place for real estate investment, according to a new study.

The Irish capital has been ranked in 12th position out of 31 European cities in terms of prospects, down from 3rd place a year ago.

Joanne Kelly, real estate leader at PwC Ireland, which together with the Urban Land Institute compiled the figures, said there had been a softening of sentiment in the Dublin market primarily due transport infrastructure problems. In addition, the housing crisis, and the potential negative impact of a disorderly Brexit, were cited as factors making the city less attractive to investors.

“The market size and liquidity should also be borne in mind – Dublin still represents a very small portion of the commercial real estate market in Europe – and has been factored in for the first time in this year’s report,” Ms Kelly said.

Dublin continues to be positioned very strongly for political stability, a pro-business environment and being able to attract young people from all over Europe, according to the report.

It noted there was record take-up in the capital’s office sector, led by the tech giants and forecast this would likely continue.

The study also highlights that investors who would usually choose London over Dublin are increasingly eyeing Dublin as an alternative, with German, French and Asian funds all considering the Irish capital for future investments.

The report says that Brexit-linked industrial/logistics take-up of space was up 60 per cent in the first half of 2019 versus the same period a year earlier.

Paris tops the list as the overall favourite for investment prospects in 2020, with Berlin and Frankfurt also in the top three. London is tipped as Europe’s fourth most attractive city for 2020 despite Brexit.

The study suggests that a lack of residential property is potentially going to become the biggest constraint on the growth of Dublin in the years to come.

1 Four things that could help Ireland escape from the Covid-19 recession
2 Brown Thomas and Arnotts shoppers will be able to book time slots for entry
3 College of Surgeons faces legal challenge to Na Fianna GAA contract
4 Tax and the Pandemic Unemployment Payment: Your questions answered
5 Consumers hesitant about travel as Covid-19 restrictions ease
6 Ross O’Carroll Kelly column 'not racist towards English people'
7 Irish banks’ failure to innovate could leave them written off for good
8 Michael Smurfit: total lockdown of economies a ‘serious mistake’
9 Job losses in tourism and retail in Dublin could be permanent, new report warns
10 Irish economy to contract by 12%, ESRI forecasts
Real news has value SUBSCRIBE