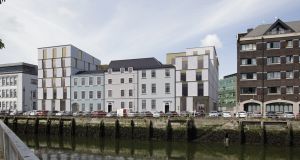 Premier Inn owner Whitbread has secured a deal with its development partners, Greenleaf Group and Warren Private, for a new 183-bedroom hotel in Cork city centre.

Located at Morrison’s Quay on the banks of the river Lee, the Cork Premier Inn Hotel will be the company’s first site in Ireland outside Dublin. Since announcing its intention last year to grow its Irish presence from a single hotel at Dublin Airport, Premier Inn has secured more than 500 new rooms across Dublin city centre – at South Great George’s Street, Jervis Street and at Castleforbes Business Park near the IFSC. All three hotels are expected to open for business from early 2021 onwards.

Premier Inn’s first site in Cork meanwhile is within a five-minute walk of Cork’s new events arena which is currently under construction, next door to the College of Commerce and across the river from both the Cork School of Music and UCC’s Cork University Business School, which is due to open in 2023. The hotel will be delivered alongside the conversion into offices of three protected buildings currently on the site.

After growing in Dublin and Cork, Whitbread says it sees the potential for Premier Inn hotels in other cities including Galway, Limerick and Killarney. The business is seeking sites as freeholds, leaseholds, office to hotel conversions as well as going concern purchases. Dan O’Connor, executive vice president of JLL’s hotel division, is working with Whitbread on its plan to secure 3,500 hotel rooms across the country.

Commenting on Whitbread’s move into the Cork market, the company’s head of acquisitions, Kevin Murray, said: “Securing a new Premier Inn hotel at Morrisons Quay is a major milestone in our expansion into Ireland as it marks our first site outside of Dublin. Cork has an exciting future as a cultural and educational centre, so we see real potential in the business and leisure markets there.”

Greenleaf Group director, Mark Elliott, added: “The proposed development at Morrisons Island is an important regeneration scheme for Cork. The objective behind the proposed development is to re-utilise the existing and protected buildings, which are currently neglected, and create a vibrant new building of the highest quality on the remaining land. We hope the proposal will be well received by Cork City Council and look forward to working with all stakeholders during the planning and development of the site.”