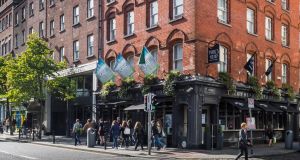 The sale of the landmark Paramount Hotel in Dublin’s Temple Bar district is expected to attract significant interest from both Irish and international investors looking to establish a presence or consolidate their existing foothold in the capital’s thriving hotel market.

The high-profile hotel, which has 66 bedrooms currently and the potential to increase to 130 bedrooms, has been brought to the market by agent CBRE at a guide price of €25 million.

The Paramount and its well-known bar, the Turk’s Head, occupy a pivotal location on Parliament Street in the heart of Temple Bar, an area widely-regarded as a key focal point for Dublin city centre’s tourism industry. The hotel is located within a short walk of numerous of the city’s most-popular visitor attractions including City Hall, Christ Church Cathedral, the Guinness Storehouse, Trinity College Dublin, the GPO, St Stephen’s Green and Grafton Street.

The Paramount Hotel currently operates from 10 interconnecting prominent buildings with frontage to Parliament Street, a major city thoroughfare linking Dublin city centre to the south suburbs, together with frontages to Essex Gate and Upper Exchange Street. The hotel frontages to these streets is approximately 89m (293ft).

While the hotel is being offered for sale with the benefit of full planning permission to increase its existing room count from 66 to 117 bedrooms, a further planning application is pending to bring that number to 130 suites.

Paul Collins of CBRE’s hotel and licensed division says: “The sale of the Paramount Hotel offers Irish and international investors an outstanding opportunity to acquire a prime hotel in a key international capital city. Established hotels in Dublin city centre hotels rarely come to the market and this sale is especially significant as the Paramount Hotel is being offered with the benefit of full planning permission for additional rooms.

“The successful purchaser will have the choice to continue trading under the already well-established and independent Paramount Hotel name or, an international hotel brand. Many international hotel companies are extremely eager to establish a flagship presence and their brand in the Dublin city centre market.”