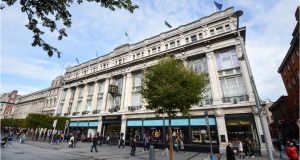 The hotel will be located on the site of the former Clerys warehouse building at Earl Place, which has already been demolished

The developers of the former Clerys department store on O’Connell Street in Dublin have secured planning permission for an even larger hotel than originally proposed on the site.

Dublin City Council has approved revised plans by OCES Property Holdings that will see the proposed four-star hotel contained in the redevelopment of the landmark building extended by two floors to nine storeys and the number of bedrooms from 176 to 213.

The hotel will be located on the site of the former Clerys warehouse building on Earl Place, which has already been demolished.

Consultants for OCES Property Holdings said the revised plans, which would result in the removal of some bedrooms on the ground floor, would permit expanded restaurant facilities and would make for “a much more economically viable hotel size”.

The changes were supported by Fáilte Ireland, which said the extra 37 bedrooms would be “a valuable addition to the accommodation stock in Dublin and would go some way to addressing the accommodation challenge being faced by the city”.

However, the revised plans were opposed by An Taisce, which said there were “significant collateral impacts” to increasing height in a tight, constrained urban site as they would lead to a loss of daylight for other buildings in the area.

The height of the new building will be about 33m, which is 5m above the maximum height allowed in the Dublin City Development Plan 2016-2022.

However, the council said that new building height guidelines issued by the Department of Housing, Planning and Local Government in December 2018 allowed for significant increases in building heights in urban areas.

A report submitted with the application stated that although the additional floors would be visible from Marlborough Street, they would not be overbearing or have a serious impact on protected structures or the O’Connell Street Architecture Conservation Area.

Council planners said the proposed location of the main hotel entrance and reception at Earl Place would help enliven the area as it was currently “very much a back street”.

Subject to a number of planning conditions, the council said the revised plans for the hotel would not seriously injure the visual amenity of the area.

An Bord Pleanála approved a master plan for the redevelopment of Clerys in 2017 following the closure of the department store in June 2015 with the loss of more than 460 jobs.

It provides for a mixed-used development including retail, office, cafes, bars, a panoramic rooftop restaurant and the hotel.