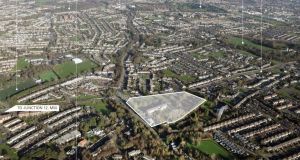 An aerial view of the 3.4 hectare Taylor’s Lane site at Ballyboden in south Dublin.

The Augustinian order has secured about €20 million from the sale to developer Frank Fahy’s Shannon Homes, of 3.4 hectares (8.6 acres) of land next to its provincial headquarters at Ballyboden in south Dublin.

The price paid for the site represents a premium of just over 11 per cent on the €18 million the property had been guiding when it was brought to the market by Jack Devlin of GVA Donal O’Buachalla in March of this year.

Mr Devlin declined to comment on the matter when contacted by The Irish Times.

A feasibility study prepared by John Fleming Architects in advance of the sale however indicates that the site at Taylor’s Lane could – subject to planning permission – accommodate a medium-density residential scheme of 212 homes or a build-to-rent development of 436 units. The scale of both proposals suggests that Shannon Homes may seek permission for development of the site under the terms of the Government’s temporary fast-track planning system. The Strategic Housing Development scheme allows developers seeking permission for in excess of 100 residential units to bypass local authorities and apply directly to An Bord Pleanála.

A novitiate was developed on the site in the 1950s and it was subsequently leased to the State in 1980 which operated a day-care centre there until December 2015. Adjoining the site to the south, the HSE has planning permission for a primary care centre.

The Taylor’s Lane site has extensive road frontage and is close to the villages of Rathfarnham and Knocklyon, Nutgrove Shopping Centre and Dundrum Town Centre. Junction 12 of the M50 is a short drive away, as is Marlay Park and St Enda’s Park.

The Augustinian order’s sale of the site forms part of a wider rationalisation of its property assets. The proceeds of the transaction will be used to support the continuance of the Augustinian ministry in Ireland. This will include provision for the care of elderly members of the community and the support of the order’s missions overseas.

The Augustinians first arrived in Ireland in 1259 and established a friary here in 1282 at Abbeyside, Dungarvan. By 1358 the order had established a “house of formation” for its students and went on to develop a further 19 such houses by 1450. In the 1830s the Augustinians set up schools in Dungarvan and New Ross while also establishing missions in England, India and the US. Missions to Africa followed in the 1920s. The order has care of three parishes in the archdiocese of Dublin.