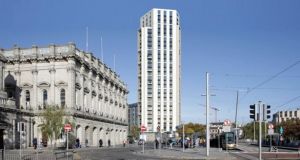 A computer-generated image of the 305ft residential tower Chartered Land intends to develop at Parkgate Street.

Developer Joe O’Reilly’s Chartered Land has moved a step closer to securing approval from An Bord Pleanála for the development of a 29-storey apartment building at Parkgate Street in Dublin’s inner city.

Having considered a fast-track planning application submitted by Chartered Land in February, the board’s inspector expressed satisfaction in the course of a 108-page report with the “height, massing and slenderness” of the 93m (305ft) tower, but has called for a further proposal in relation to its architectural detailing.

Giving its assessment of the developer’s original proposal, An Bord Pleanála said in its order that the tower’s “architectural design quality and materiality” did not successfully address the opportunities provided by the site or “protect nor enhance the skyline at this location”.

While Chartered Land will now have to submit a fresh design for the Parkgate Street scheme’s centrepiece, it has been given full planning permission for the remainder of the development.

The 29-storey tower, which is set to comprise 160 apartments, forms part of a major mixed-use complex Mr O’Reilly is aiming to deliver on the landmark Hickeys site. The residential element of the scheme includes a further 321 studio, one- and two-bed apartments distributed across three other blocks of eight storeys. Some 3,698sq m (39,805sq ft) of space will be dedicated to office use while a further 658sq m (7,083sq ft) will be reserved for retail, cafe and restaurant space.

An Bord Pleanála’s approval of the Parkgate Street tower’s height is consistent with the provisions of the Dublin City Development Plan. This identifies Heuston Station and its environs as a strategic development regeneration area. The area known as the “Heuston Gateway” is identified as a western counterpoint to the docklands, offering the potential for buildings of more than 50m (16 storeys) in height.

The docklands area has already seen the approval of applications for higher-rise apartment buildings from other developers. Last February, Seán Mulryan’s Ballymore secured permission from An Bord Pleanála for a 23-storey residential tower (79.45m/261ft) as part of the wider Connolly Quarter mixed-use scheme it is aiming to build on a 2.88 hectare (7.12 acre) site adjacent to Connolly Station in Dublin 1.

Elsewhere in the city centre, developer Pat Crean’s Marlet Property Group is awaiting the outcome of an appeal by An Taisce to An Bord Pleanála of its plan to increase the height of an 11-storey office block it is developing on the site of the former Apollo House to 21 storeys (79m/259ft) through the addition of a a 10-storey tower with 54 apartments.

Johnny Ronan’s Ronan Group Real Estate meanwhile is hoping to increase the number of apartments on the company’s 1.8 hectare (4.6 acre) Project Waterfront site in the north docklands from 420 to 1,000 units by distributing the scheme across two towers rising in height to 44 and 40 storeys respectively.

1 If international visitors are pariahs why are we not testing them on arrival here?
2 Varadkar to meet banks in row over interest on mortgage payment breaks
3 Can Grafton Street stop the flood of closures?
4 Belgium helps Ireland to a Brexit boon
5 ‘My rent here is so low it’s a joke’
6 Goodbody’s planned €155m sale to Bank of China falls through
7 Legal tech start-up aims to make DIY divorces easier and cheaper
8 New Powerscourt Springs hotel to open in defiance of virus gloom
9 Will family’s tax debt stop me getting my inheritance?
10 This charming man: how Paschal Donohoe won the Eurogroup presidency
Real news has value SUBSCRIBE