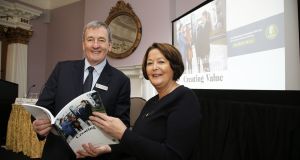 Irish Residential Properties Reit (Ires), the State’s largest private residential landlord with more than 3,700 properties, defended a 40 per cent increase in the fees of its chairman, Declan Moylan, at is annual general meeting on Wednesday.

The meeting was held by way of a conference call, in keeping with Covid-19 restrictions, and lasted 35 minutes. The company’s remuneration committee increased Mr Moylan’s fees to €140,000 a year from the end of February 2019, with the chairman recusing himself from being involved in the decision.

“In determining this level, the Remuneration Committee took into account a comparison with levels in a comparable group of Irish and UK Reits and the constituents of the Iseq 20 and the significant increase in the company’s scale since the fees were last reviewed,” said group chief executive Margaret Sweeney, responding to a shareholder question submitted before the meeting.

Meanwhile, proxy advisory group Institutional Investors Service (ISS) had advised Ires shareholders to vote against a resolution on the company accounts in protest over the fact that large increases in the salary and bonuses paid to Ms Sweeney last year were not flagged in its 2018 annual report.

ISS has highlighted how Ms Sweeney was granted a 21 per cent increase in her base salary and a 50 per cent rise in her bonus payment for full-year 2019, without it being notified to investors in the company’s 2018 annual report.

ISS also said there was a “lack of sufficiently compelling rationale” to warrant the increases, adding that support for Ires’s non-binding resolution to approve the company’s report and accounts was “not considered warranted”. Some 13 per cent of shareholders that participated in a poll voted against the resolution, according to the results of the annual general meeting.