US tech giant’s requirement for 40,000sq ft could accommodate up to 300 extra workers 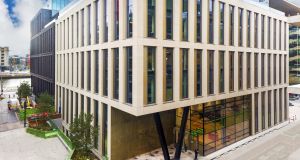 Pinterest’s current EMEA headquarters are located at No 2 Dublin Landings in the city’s north docklands.

US-headquartered social media giant Pinterest looks set to grow its existing 100-strong Dublin-based workforce by up to several hundred additional workers, through a move to new offices in the capital.

The company, which is based currently at No 2 Dublin Landings in the city’s north docklands, is understood to have engaged JLL to secure between 25,000 and 40,000sq ft of fully-fitted office space to facilitate the expansion of its EMEA headquarter operations here. Such a move would provide Pinterest with the capacity to increase its current office-based headcount by up to 300 employees.

Since being established in 2009, Pinterest has grown its operations exponentially to the point where it now boasts some 322 million monthly active users worldwide. And although just under one-third of the social media platform’s users are from outside the US, it gained around 51 million new international users each month last year compared to the five million it added in the US. The company’s massive popularity is driven by the more than 200 billion “pins” or images it posts offering ideas on a range of activities including shopping, recipes, interior design and social activities.

While Pinterest opened its first office in Dublin in 2016 with just one employee, by last December its headcount here had increased to 100 people employed mainly across the areas of sales and community operations for the EMEA. The company now has plans to grow the size of its engineering team here, having established Dublin as its first location for the activity outside of the US last December.

The news of Pinterest’s search for a new office to facilitate its growth plans comes just days after Bloomberg reported that Amazon is in negotiations to lease No 2 Burlington Plaza. At 75,000sq ft, the building, which is occupied by Bank of Ireland currently, is capable of accommodating up to 750 workers.

It also follows on from this newspaper’s report on May 6th last of Microsoft’s plan to rent 47,000sq ft of office space at No 3 Dublin Landings. The proposed deal will give Microsoft room to grow its existing 1,800-strong Irish-based workforce by an additional 400 workers.