Guide price suggests value of €72,800 per space, reflecting a return of more than 5% 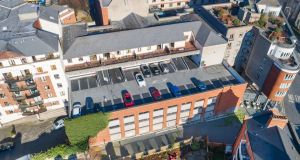 The guide price suggests a value of €72,800 per space which would reflect a return of more than 5.2 per cent based on market rents.

Christchurch car park is well located to serve the Dublin 2 and 8 central business district, the Four Courts-Woodquay area and Thomas Street. It has good signage from the quays and the busy north-south High Street arterial route.

The car park opened in 1994 and has been in the same ownership since.

It extends over four floors, occupies a site of 0.4 acres and includes fully automated barriers, payment machines and passenger lift.

The facility is being sold subject to a short term lease to Q-Park which expires in June. A purchaser could then owner-operate the property or lease it on a long-term basis.

This part of Dublin 8 is undergoing significant redevelopment with new offices, retail and student/residential accommodation schemes under way.

The value of car parks in the city may benefit from recently announced plans by Dublin City Council to increase on-street car parking rates by up to 70 per cent.

Dublin city councillors last November agreed to a 10 per cent rise in on-street parking charges in high-demand areas of the city – the first parking charge increases since 2008.

There have been a number of car park sales in recent years. Property developer Gerry Conlon bought the 171-space Trinity Street car park off Dame Street for more than €18 million in late 2017. It produces a rent roll of €636,000 and the deal reflected an initial return of about 4.5 per cent.

Late last year the Lisney estate agency sold its former car park between Baggot Street and Fitzwilliam Square in Dublin’s south inner city for more than €2 million – about 25 per cent above the guide price. The 32-space car park on 0.14 acres has strong redevelopment potential.

A property portfolio including the 165-space Grand Canal car park close to the Bord Gáis Energy Theatre came on the market in September 2017 at more than €15 million. It had been bought for about €5 million in 2014.

Car parks, like nursing homes and build-to-rent residential schemes, are often under rated as an investment class given their tendency to produce steady, if unspectacular, returns. The stuff of dreams for pension investment managers and property funds.