Company to open in Naas next month with Drogheda, Navan and Portlaoise to follow 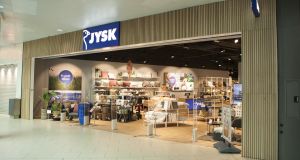 Jysk is often seen as a competitor for Ikea, but with medium- rather than mega-sized outlets

Competition in the growing homeware and furniture sales market is hotting up with the arrival of Danish home retail group Jysk which plans to open 20 stores and create 200 jobs across Ireland over the next two to three years.

The company– often seen as a competitor for Ikea but with medium- rather than mega- sized outlets – is to open its first Irish store next month in Naas with May openings set for shops in Drogheda and Navan, and an August/September opening planned for Portlaoise.

Jysk is to open a 700sq m (7,500sq ft) shop at Navan Retail Park at similar rental terms and lease duration to its Naas outlet. The company has also agreed to build a 500sq m (5,382sq ft) mezzanine space at its Navan unit.

Aiden McDonnell of Colliers International acted for Jysk in all the above lettings.

Opting for locations outside of Dublin suggests the company shied away from higher retail rents in the capital until it established brand awareness in the Irish market. Jysk’s stores are generally about 1,300sq m (14,000sq ft) which makes its format ideal for retail parks and shopping centres with sufficient customer collection points.

The company has more than 2,700 stores and 23,000 employees across 51 countries and operates under the Dänisches Bettenlager banner in Germany and Austria. Jysk was founded in 1979 by Danish billionaire Lars Larsen and recorded turnover of more than €3.5 billion in 2018. Forbes ranked Mr Larsen as the world’s 514th richest person with an estimated net worth of $2.8 billion (€2.46 billion).

Jysk’s aggressive entry into the Irish market shows its confidence in bricks and mortar retailing at a time when the sector is under pressure from ecommerce. Ikea, for example, dithered for quite some time before finally deciding not to build a second Irish superstore in south Dublin last year.

Meanwhile, TK Maxx’s sister store, Homesense, is also understood to be considering up to five new stores in Ireland after its first homewares outlets opened in 2017 at Westend Shopping Park in Blanchardstown and at the Capitol development on Cork’s Grand Parade.

The Irish homeware and furniture sales market has recovered strongly since the economic crash.