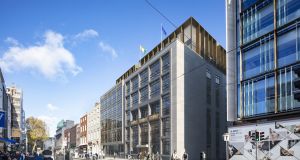 The existing premises, stretching from No 9 to No 12 Dawson Street. Mr McKillen jnr has received permission to turn the ground floor of the structure, which fronts on to Dawson Street into a restaurant totalling 851.7sq metres.

Additionally, the office areas will be upgraded and better staff facilities built. Total floor area at completion will be 9,207sq m (99,103sq ft), up from 6,731sq m, after a rear extension and two setback floors are built on top of the existing five-storey structure.

Dublin City Council granted permission but imposed conditions. It required Oakmount to pay €13,351 in respect of the Luas Cross City scheme, which passes its front door, and €24,615 to the planning authority relating to costs for public infrastructure and facilities benefiting the development. The council also imposed time limits for building work on the site.

Mr McKillen jnr’s company last year paid €38 million for the interlinked buildings and submitted a planning application in December to redevelop them. Oakmount’s related company, Press Up Entertainment, will probably lease the restaurant unit given that it has rented all of Oakmount’s restaurant, bar and hotel developments to date.

The Irish Times reported in January that collaborative workspace provider WeWork – which recently rebranded to the We Company – was in talks to lease the building.

The planning permission granted open office areas and the removal of existing partitions, a feature of WeWork’s other properties.

New Ireland is a subsidiary of Bank of Ireland and relocated to South Frederick Street some time ago.