Chaplains development in Dublin 22 has annual rent roll of over €494,000 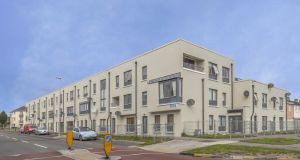 A fully-let scheme of 32 residential units in Clondalkin is guiding €6.25 million through Savills. The Chaplains development in the Rowlagh area of the Dublin 22 suburb is producing a rent roll of €494,664 per annum and, given the guide price, this would represent a gross initial yield of 7.58 per cent.

According to the agent, the average passing rent of €1,288 per month in the development “offers significant reversionary potential for investors”. Dessie Kilkenny of Savills claims recent refurbished lettings in the scheme have achieved rents of €2,000 per month.

Chaplains was originally constructed in 2007 and is laid out across three blocks – Chaplain’s Court, Chaplain’s Place and Chaplain’s Terrace.

The scheme is within 1km of Liffey Valley Shopping Centre, is 1.6km from Park West railway station, and the Red Cow park-and-ride site for the Luas Red Line is 5.4km away. The M50 and N4 are also easily accessible by car.

The residential investment market has grown strongly since 2016, when the sector opened up on the back of a shortage of rental accommodation and rising population levels. It constituted just 6 per cent of the Dublin investment market in 2016, rising to 17 per cent in 2017 and stood at 24 per cent over the first six months of 2018.

Investor activity in the sector was even larger than in the office and retail markets in the second quarter of 2018.

According to research by Colm Lauder of Goodbody, growth in the Irish residential investment market reflects international trends.