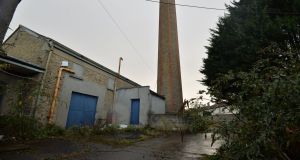 The former Magdalene Laundry in Donnybrook, Dublin 4, which is set to be redeveloped as apartments. The chimney stack will be retained. Photograph: Alan Betson

An Bord Pleanála has approved plans for an apartment complex on the site of a former Magdalene Laundry in Donnybrook, Dublin 4.

The Pembroke Partnership plans to build 44 apartments in three-to-four storey blocks on the site, which accommodated up to 120 women at any one time.

In 2017, a previous 25-unit residential plan for the site was withdrawn and the applicants for the revised plan said a subsequent archaeological dig at the site uncovered no burials. The latest decision sees the appeals board upholding permission granted by Dublin City Council last year.

That permission was placed on hold after Dr Brendan Tangney and others lodged an appeal.

Dr Tangney claimed that the development is not appropriate given the historical and social significance of the site, also claiming the permission did not have regard to proper planning.

In response to the appeal, the Pembroke Partnership said careful consideration has been given to the social, cultural, historical and conservation significance of the site in the design of the proposed scheme.

The applicants said that the design approach is respectful of the site’s history and the structures of significance on site and the new development would successfully relate and integrate with those structures and the surrounding area.

In her 31-page report on the appeal, appeals board inspector, Irene McCormack acknowledged that “the site has a controversial and sensitive history”.

She said the site stopped being used as a Magdalene Laundry in 1992, when it was sold to a private company. It was operated as a commercial laundry until 2006.

The inspector found the proposed development “is located within a culturally sensitive site and to this end the applicant has made significant efforts to acknowledge the sensitivity of the site and to record its history for posterity”.

Ms McCormack noted that former residents have been consulted and have engaged with the endeavours to record the history of the site.

She further concluded that the existing buildings on the site are not protected, have been modified and adapted over the years and have outgrown their useful life expectancy. The site has been vacant for 13 years and can no longer function with its original use, she added.

Ms McCormack noted that the applicant is proposing an art work installation on the site in acknowledgement of the former use and said a wall plaque acknowledging the site’s history would also be appropriate.

The Pembroke Partnership plans to retain the chimney stack on site. The stack was declared a protected structure in 2012 as a way of honouring the women who were forced to work at the Magdalene laundry, one of four to operate in Dublin.