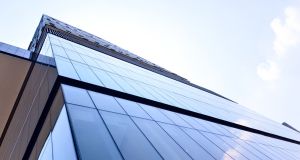 The MSCI/SCSI Ireland Quarterly Property Index showed the office-dominated Irish commercial property sector delivered a 5.3 per cent return last year. That’s down from 9.6 per cent in 2018 and rates of 36 per cent and 25 per cent seen in 2014 and 2015. Photograph: iStock

Following a stunning recovery by Irish commercial property in the past seven years, rumblings are beginning to surface.

Not even three months after completing its €1.34 billion purchase of Ireland’s first real-estate investment trust, Green Reit, UK-based property fund Henderson Park moved this week to put a group of Dublin city centre offices from the portfolio on the market for more than €400 million.

The Irish Times reported on Friday that two of the best-known property funds – the Irish Life Irish Property Fund and Aviva-managed Friends First Irish Commercial Property Fund – used by pension savers in the State had been hit by clients pulling significant amounts of money in recent months.

It subsequently emerged that Aviva had to go one step further to take the draconian measure of stopping investors in the Friends First fund and another of its own property portfolios from taking out money for up to six months. The two funds have a combined €940 million of assets.

The Irish Life and Friends First funds had initially responded by revaluing their assets on a “disposal basis” – or at levels the managers of the fund reckon they would achieve if they had to sell property to meet redemption demands.

This resulted in the funds being marked down by 7 per cent and 9.1 per cent, respectively. In other words, someone looking for their money back would have to accept less money than prior to the resetting of the valuations.

There’s no suggestion that forced asset sales will be necessary, and the funds have had cash buffers.

But the decision by the Aviva funds evokes memories of similar moves by investment firms during the financial crisis, in the UK following the Brexit referendum in 2016, and, more recently, London-based M&G Investment suspending a property portfolio from trading in early December amid a spike in withdrawal requests on concerns over Brexit and ongoing difficulties in the retail sector.

The latest developments add to the signs that the Irish commercial property market cycle is at a late stage.

The MSCI/SCSI Ireland Quarterly Property Index showed that the office-dominated Irish commercial property sector delivered a 5.3 per cent return last year. That’s down from 9.6 per cent in 2018 and rates of 36 per cent and 25 per cent seen in 2014 and 2015 as the recovery was in full swing. Returns are slowing.

Henderson Park raised eyebrows by last year paying marginally above the value that Green Reit had put on its own assets. When Green Reit’s co-founders Stephen Vernon and Pat Gunne put the company on the market last April, the stock was trading at more than a 20 per cent discount to its net asset value (NAV).

Henderson Park’s planned sale of the so-called Capital Collection city-centre portfolio – including One Molesworth Street, where tenants include Barclays Bank Ireland and London’s Ivy Restaurant – come at a time when prime central business district office yields are at 4 per cent, according to CBRE Ireland data.

It’s believed that Henderson Park plans to use much of the proceeds to develop other key former Green Reit assets such as the Horizon Logistics Park, close to Dublin Airport and the M50, and the Central Park office campus at Sandyford in south Dublin. The focus switch would appear to make sense when judged against the fact that prime south suburb offices and Dublin industrial assets are currently yielding 5 per cent.

The Aviva and the Irish Life funds have sizeable holdings in retail outlets, a corner of the market that has been hit in recent times by growth in online shopping

Clearly, one of the biggest investors in the market in recent years has decided that the time has come to be more discerning in terms of segments of the market. This comes as the overall Dublin office vacancy rate, at about 5 per cent, remains at historically low levels and the estimated 950,000sq m of office space expected to be built over the next five years is broadly in line with demand seen since the early 2000s.

The Aviva and the Irish Life funds have sizeable holdings in retail outlets, a corner of the market that has been hit in recent times by growth in online shopping. This may have fuelled redemption requests.

Goodbody Stockbrokers analysts said in a note to clients on Friday that while much of the withdrawals from the Irish Life and Aviva/Friends First property funds were said to be small individual investors, “we understand that the more institutional-biased property funds are still seeing inflows”.

Sources have said that Green Reit takeover last year was seen by some pension adviser types as a sign that the market is nearing a peak, prompting outflows of retail investor funds late last year.

The Central Bank noted in its latest financial stability report, published in December, said that the stabilisation of commercial real estate (CRE) rental yields at levels below their long-run average “may be suggestive of stretched valuations in the domestic CRE market”.

Such low yields still look attractive, it has to be said, when compared against ultra-low government bond yields. Irish 10-year bonds are currently carrying a negative yield of 0.14 per cent, meaning that investors buying these notes at the moment are paying the Government to hold their money.

Still, it emerged on Friday that European authorities overseeing banking stress tests this year are forecasting that Irish commercial property prices will decline this year – albeit slightly – for the first time since 2011.

Irish values are expected to declined by 0.9 per cent in each over the three years to the end of 2022, compared to the EU baseline case of average annual gains of about 3.5 per cent during the period.

The Irish market is no longer seen as a one-way bet.