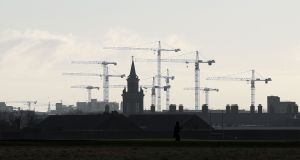 The majority of the property fund withdrawals have come from smaller investors and brokers who make up the investment base of the two funds.

Aviva Life & Pensions Ireland moved on Friday to stop investors in two Irish commercial property funds withdrawing money for up to six months after dealing with a rise in demand in recent months from investor seeking their money back.

The funds have a combined value of €940 million and include assets such as the Blackrock Shopping Centre in south Co Dublin, the Royal Hibernian Way shopping arcade in the city centre and the Globe Retail Park in Naas, Co Kildare.

“Due to recent net outflows from the Aviva Irish Property Fund and the Friends First Irish Commercial Property Fund, we have taken the decision to close both funds to all outgoing transactions, including surrenders, and switches,” Aviva said in a statement, adding that both funds are open to new business.

The Friends First fund last put up a gate to withdrawals more than a decade ago at the height of the financial crisis.

The development comes after The Irish Times reported on Friday that the Friends First Commercial Property Fund and Irish Life Property Fund – which have a combined value of more than €1.4 billion – had written to investors this week to alert them to outflows and that they had now moved to price the funds on a “disposal basis”.

The value of a fund goes down when it is switched to a disposal basis as the assets within it are valued differently. The overall value of the Irish Life fund decreased by 7 per cent as a result of the change, and Aviva/Friends First fund reduced by 9.1 per cent.

Irish Life told brokers on Friday night it had no plans to follow Aviva in imposing a moratorium on redemptions on its fund.

“However, as with all property funds it is prudent for us to reserve the right to do so,” the company said. “With very good levels of cash in the fund there are currently no material concerns with regard to liquidity.”

Meanwhile, Zurich Insurance confirmed on Friday that its Irish-focused property commercial fund had also been repriced from an acquisition to a disposal basis, resulting in a 7.7 per cent decrease in its value. “This is due to an increase in net outflows from the fund,” a spokesman said.

The majority of the fund withdrawals have come from smaller investors and brokers who make up the investment base of the portfolios affected. Commercial property sources believe the development signals that many of the smaller investors and brokers feel that the time is right to take money off the table after several years of extremely strong returns.

It separately emerged on Friday evening that Irish banks are being stress tested by European authorities along a central scenario of commercial and home prices falling slightly over the next three years.

Avivia said its Irish Property Fund was “well positioned with its Dublin-centric portfolio holdings” and that it had a low vacancy rate of 1.55 per cent compared to 6.1 per cent for the industry. The fund delivered a 5.1 per cent return for investors last year, it said. The Friends First Irish Commercial Property Fund “is performing well”, it said.

“The Irish economy continues to perform well, with GDP [gross domestic product] growth expected to come in at 5.6 per cent for 2019, primarily due to strong export numbers, continued foreign direct investment and further growth in the multinational sector,” the company said.

“Reduced Brexit uncertainty has also led to an improvement in economic sentiment. With more people in employment, companies have requirements for additional commercial space and consumers have additional spending power – both of which continue to positively impact the property sector.”

Still, the Aviva funds had between 34 per cent and 40 per cent of their net asset values in retail property, at a time when sentiment towards this segment of the industry is weak amid an ongoing shift by consumers towards online shopping.

London-based M&G Investments was forced last month to stop investors withdrawing money from its flagship property fund, with investors said to have been concerned by its high retail exposure.

1 If you think governments are spending money now, just wait
2 Coronavirus: Construction sector most significant part of new shutdown
3 Remote working doesn’t suit everyone, and it exposes woolly leadership
4 British exceptionalism backfires in style as Johnson tests positive for coronavirus
5 Can husband keep savings and half the house in divorce?
6 Volkswagen burning through €2bn in cash per week
7 ESRI’s scary analysis may not be scary enough
8 First look: Huawei’s P40 Pro – are you ready for a Google-free life?
9 Mobile, broadband suppliers to be given extra radio spectrum
10 Hysteria or prescience? Ireland goes big with financial response to coronavirus
Real news has value SUBSCRIBE