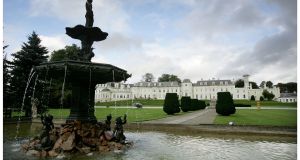 Veteran businessman Michael Smurfit has completed the sale of the K Club golf resort to nursing homes operator Michael Fetherston, in a deal believed to be worth between €65 million and €70 million.

Mr Smurfit, former chairman of the Smurfit Kappa packaging group, said it is the “end of an era”, as he handed over formal control of the five-star hotel and two golf courses to Mr Fetherston, who operates TLC nursing homes group.

“The completion of the sale of the K Club represents the end of an era for me and my family,” said Mr Smurfit. “I extend my sincere gratitude to the K Club team and its members for their loyalty and support over many years.”

Mr Smurfit took full control of the K Club, which in 2006 hosted the Ryder Cup, in 2011 when he bought out the stake owned by developer, Gerry Gannon. The two men had bought the resort on 2005 for €97 million.

The K Club has struggled to generate a financial return for Mr Smurfit, however. Accounts for Bishopscourt Investments, his company that held the asset, show sales at the resort slipped by 7 per cent to about €17.5 million in 2018. It made a loss for the year of €3.7 million.

Mr Smurfit put the resort on the market in 2018 seeking €80 million. The Irish Times reported the interest of Mr Fetherston in September. He has been involved in various hospitality enterprises, including the Clifton Court hotel on Dublin’s quays. and bars in Raheny and Dublin city centre.

He is reported to be close to selling TLC, which operates five facilities in the greater Dublin area, to a French group for about €150 million.