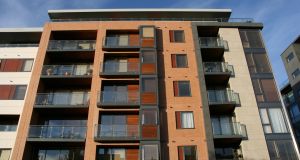 Goodbody argues rent freezes would not address the fundamental problem in the Irish market – lack of supply. Photograph: iStock

The rent freeze being advocated by some political parties in the general election would negatively affect housing supply, Goodbody Stockbrokers has said.

A research note released by the broker suggests that a three-year rent freeze applied to all tenancies would “most likely result in a decline in supply”.

The Labour Party and Sinn Féin have both committed to freezing rents along these lines, although Fianna Fáil has backed away from previous commitments to introduce the measure, citing concerns over its constitutionality.

According to the Goodbody note, the prospect of a rent freeze knocked 20 per cent off the value of Ires, the State’s largest institutional landlord, when it was first floated.

The broker added that rent freezes would not address the fundamental problem in the Irish market, which is a lack of supply, and pointed to a 15 per cent decline in available rental supply in San Francisco after rent controls were introduced.

Research from 2015 modelling the impact on London of a rent freeze showed declines in private rental sector supply, even though some of the scenarios were “less severe” than the proposals currently on the table from Irish political parties. The research also suggested that almost 60 per cent of landlords would look to “dispose or reduce” properties if a three-year rent freeze was introduced.

Eoin Ó Broin, the Sinn Féin housing spokesman, said his party’s rent freeze proposals needed to be considered in the context of a promised €6.5 billion investment in public housing, which he said would aid supply. He also argued the proposal differed substantially from Berlin, whose rent freeze has been cited during the campaign trail as hurting supply in that city. He said investors, currently enjoying record yields, would not be easily discouraged from investing in Ireland.

Mr Lauder said that the costs and impact on labour supply of such an investment programme would be “phenomenal”.

“The Government doesn’t have the financial capacity to do that. If they borrowed or raised taxes to do so, the industry doesn’t have the capacity,” he said. Dynamics which allowed the Republic to import labour from newer EU states had evolved, he said.

“When we solved that issue 15 years ago, we imported labour. The relative wealth dynamics between Ireland and the accession states has changed . . . it’s much more challenging for us to bring additional workers on stream.”

The Goodbody research found that Dublin net yields are still among the highest in Europe, driving investment into the sector.