Alan Sugar: ‘I don’t flower my words, I say it how it is’ 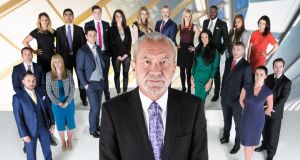 Lord Alan Sugar and some of his Apprentice contestants. The entrepreneur said people appreciate his blunt manner.

Contestants on the BBC show The Apprentice might be nervous when in his presence but Alan Sugar believes that most people appreciate his direct manner.

“What’s on my lung is on my tongue,” the British business magnate told attendees at the Pendulum Summit in Dublin on Wednesday.

The entrepreneur also claimed that if he was to go head-to-head in an Apprentice challenge against Donald Trump, who presented the original US version of the programme prior to becoming US president, he would easily win.

The Hackney-born entrepreneur who left school at 16 and started out in business selling electrical goods from a van he bought for £50 (€59), has gone on to achieve considerable success and is believed to have an estimated personal fortune of over £1 billion.

Asked about his blunt manner, Sugar said people like that he tells it as it is.

“People appreciate it. They like to know where they stand,” he said. “Most people who deal with me say they get a straight answer when they talk to me. I don’t flower my words, I say it how it is,” he added.

The businessman, who made his fortune with Amstrad, a company that achieved huge sales for its computers, TVs and hi-fis in the 1980s, said that in today’s world of political correctness he had to be more careful about what he said.

“If you are too aggressive you might find yourself at a tribunal somewhere,” he said. “It’s quite sickening really. I keep myself away from it because I’ll get in even more trouble if I get involved.”

In a wide-ranging but occasionally rambling discussion, Sugar didn’t mince his words when it came to talking about those he dislikes, calling US president Donald Trump “a tosser”, British prime minister Boris Johnson “a liar”, and British Labour party leader Jeremy Corbyn as “a complete and utter nasty piece of work”.

The businessman described media giant Rupert Murdoch as “a man who has iron balls”.

Sugar said that if he was starting out in business now he would still be successful and would likely still be working in the area of technology.

The businessman said his biggest regret as an entrepreneur was not investing for the long term while running Amstrad, an approach he said had led the company from being “heroes to zeros”.

He said he liked to invest in young people but had no time for those who didn’t think there were as many opportunities for them as there were when he was starting out.

“There is absolutely no excuse for any young person to say it isn’t like it was in your day. Trust me, you didn’t want to be in my day because it was very tough,” he said.

Sugar described Brexit as “a big mistake” and said the full ramifications of it wouldn’t be known for at least 10 years. He said it wouldn’t hit his business interests because the products he develops are made in England for English people. However, he expressed sadness over the UK’s decision to exit the European Union and was scathing about Johnson, saying he had lied to the general public.

“If I lied to my shareholders, it would be a criminal offence. The obligation of a public company chairman should be compared with obligations of politicians to the electorate – they should be held to similar standards,” he said.

Asked about what else he wished to achieve in life, Sugar said he had achieved everything he’d wanted but said he didn’t think he’d be slowing down any time soon.

“My main concerns aren’t in business but for life beyond in terms of security and safety in everyday life for my family and others,” he said.