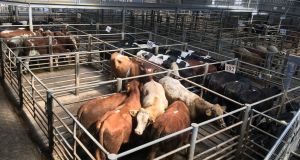 A record €13 billion in food, drink and horticulture products were exported from the Republic last year, but meat and livestock exports both declined, according to new figures from Bord Bia.

All categories except meat and livestock posted a rise in the value of goods exported in 2019, with that part of the market seeing value fall 1 per cent to €3.98 billion. Beef was hard hit, posting a 7 per cent fall in the value of exports to €2.25 billion, with the UK buying 47 per cent of that. Exports of sheepmeat fell 7 per cent to €294 million, but pigmeat exports were up 14 per cent to €941 million, and poultry was ahead by 5 per cent at €306 million.

There was, Bord Bia chief executive Tara McCarthy noted, important nuance behind the figures. She added the outlook for the coming year is positive.

“If you look at the global perspective for animal protein in general it’s actually a very positive outlook for next year. The reason for that is that there isn’t enough animal protein on the globe to replace the deficit in China.”

She said that the European consumer didn’t eat as much beef or pigmeat as they did previously, a fact that can be attributed to some extent to poor weather in May and June which delayed the start of the barbecue season.

Ms McCarthy said she was “absolutely” concerned for beef farmers and called for unity within the food industry.

“To me, one of the core requirements is our industry acting as one. A fractured industry is not a way to grab a premium, is not a way to present at a global marketplace or a European marketplace. Notwithstanding the issues and difficulties of last year, our industry uniting and having one clear message of what we stand for and what we’re aiming to achieve is absolutely core,” she said in reference to the fractured nature of beef farmer protests toward the end of 2019.

“I would say that there is a lot of pain in our industry at the moment because of pricing and I would say that if that prices were to increase, much of that pain would dissipate,” Ms McCarthy added.

Elsewhere, the best percentage rise and the highest value of exports was seen in the dairy sector, where value grew 11 per cent to €4.4 billion. Butter remained the category leader in this sphere, reaching €1.2 billion, a rise of 13 per cent.

Prepared foods returned to growth last year following a tough 2018, posting a 12 per cent rise in exports to €2.32 billion. This category includes items such as pizza, for example. And despite the Brexit uncertainty, exports to the UK in this sector rose 1 per cent. Speaking at the launch of Bord Bia’s export figures, the Minister for Agriculture, Food and the Marine, Michael Creed, warned that it is “wildly optimistic” to expect a Brexit deal to be done this year.