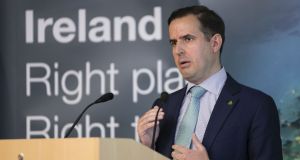 The head of the State agency responsible for securing foreign direct investment says Ireland faces increasingly stiff competition from eastern European states that are modelling their pitch to multinationals on the Irish approach.

Martin Shanahan, the chief executive of IDA Ireland, was speaking at the launch of its results for 2019, including record employment in multinationals here of more than 245,000 that generated €13.3 billion in direct wages.

Mr Shanahan acknowledged, however, that the Republic’s success is being targeted for emulation by nimble competitor states in eastern Europe. He declined to name any particular state, but trade officials have privately cited Lithuania is one country that wants to copy Ireland’s model. It competes heavily with Ireland in the fintech space and also recently attracted foreign direct investment (FDI) from US multinationals such as Dell.

“We see increased competition from eastern Europe. We see some countries doing extraordinarily well and improving their offering,” said Mr Shanahan. “Many have modelled their intervention supports and indeed their agencies around the Irish model. There is a very real threat coming from there.”

At the results briefing, IDA said it expects Ireland’s “strong performance” on FDI to continue over the next six months, after the agency easily beat all targets set in its last five-year strategy that ended last month.

IDA chief executive Martin Shanahan warned, however, that the agency sees “significant downside risk” for foreign investment as it finalises its new strategy. He attributed the risk to global trade tensions, the possibility of an economic slide in source markets, including the US, and domestic issues such as competitiveness and the capacity of the economy to absorb further expansion.

At the end of 2019, employment in multinationals based here stood at almost 245,100, an all-time high, Mr Shanahan and Heather Humphreys, the Minister for Business, announced on Wednesday.

Multinational employment growth of 6 per cent was more than double the national average of 2.4 per cent.

Almost two-thirds of fresh investment last year came from US companies, while half of the 250 FDI projects involved new investors.

Over the five years of the IDA’s most recent strategy that ran out in 2019, about 112,373 new jobs were created. All regions outside the capital hit their 30 per cent uplift target over the five years, with the midwest, mideast and southeast topping 40 per cent.

Multinationals spent €21.5 billion in the Irish economy last year, the IDA estimated, including a 12 per cent uplift in wages to €13.3 billion. That suggests the average worker in a multinational here earns about €54,400. Multinationals now account for 10.5 per cent of national employment.

“The FDI performance over the past five years has been unprecedented,” said Mr Shanahan. “My expectation is that this strong performance will continue into the first half of 2020.”

He said the State agency would “soon” release its new strategy to the end of 2024. But he warned: “We observe significant downside risk in the marketplace over the next five-year period... We have developed our new strategy to, as far as possible, withstand the challenges of global political and economic uncertainty. Our value proposition continues to be strong.”

“Companies have been making decisions in the knowledge that those [changes] have been happening for years. And as you can see in the results over the last five years, there has been no diminution in investment.”