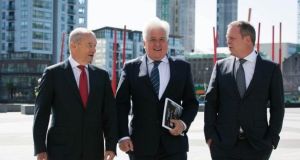 He succeeds Tim Kenny who announced in July 2019 that he would leave the company in January to take up a new role with a private Irish company.

“Following a comprehensive recruitment process, I am delighted that Shane will be joining Cairn as CFO,” said Michael Stanley co-founder and chief executive of Cairn.

“Shane has in-depth experience in senior financial and business leadership roles across a range of sectors and I look forward to working closely with him as we continue to develop and grow the business in the years ahead.”