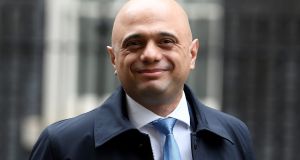 Britain’s chancellor of the exchequer Sajid Javid leaves after a cabinet meeting on Downing Street on Tuesday. Photograph: Toby Melville/Reuters

Britain’s chancellor of the exchequer, Sajid Javid, has not yet earmarked any “new” money for Northern Ireland at the beginning of the UK’s budget process to prepare for its first post-Brexit budget on March 11th.

The chancellor has claimed that his budget will “start a new chapter” for the UK economy and enable it to seize “the opportunities that come from getting Brexit done”.

However, the £400 million increase that the chancellor has promised is on the way to Northern Ireland next year is money that he had already previously allocated to the North back in September 2019.

A spokesman for the UK Treasury confirmed that the £400 million Mr Javid has referenced was “not new money”.

The previously allocated £400 million is expected to increase the total Northern Ireland budget to an estimated £11.1 billion for 2020-21.

The UK government has claimed this equates to an increase in the North’s budget of 1.8 per cent in real terms, which the Northern Ireland Secretary of State Julian Smith has described as the “biggest increase in a decade” for the North.

Yet it remains unclear if Northern Ireland’s budget next year might also receive a boost from the estimated £290 million that remains unspent from the £1 billion spending package that the North received as a result of the confidence and supply agreement between the Conservative party and the DUP.

Theresa May’s government agreed in June 2017 to allocate an extra £1 billion in spending resources to the North in return for the DUP’s support to keep it in power.

Since then, according to the House of Commons’s Scrutiny Unit, Northern Ireland has received various allocations from the pact.

Following the general election, prime minister Boris Johnson no longer needs to secure the support of the DUP

Over the 2017-18 financial period the UK parliament approved £20 million from the £1 billion fund to be added on to Northern Ireland’s annual grant from the UK Treasury.

Then, over 2018-19, the UK parliament also gave the go-ahead to a further £410 million top-up to the annual Northern Ireland grant.

The £1 billion deal also provided £150 million to be allocated to improve broadband connectivity across Northern Ireland.

The North’s previous secretary of state, Karen Bradley, outlined in February 2019 that she also intended to draw down £130 million over the 2019-20 financial year to boost the Northern Ireland budget from the confidence and supply agreement.

This in theory leaves a pot of £290 million still unspent from the original £1 billion pact.

The confidence and supply agreement between the Conservatives and the DUP was only to “remain in place for the length of the parliament”.

But, following the general election, prime minister Boris Johnson no longer needs to secure the support of the DUP.

So far there have been no further commitments from either the chancellor or the prime minister as to when or if the remainder of the £1 billion fund will be allocated to the North.

Catholic Church records may be inspected over GDPR concerns