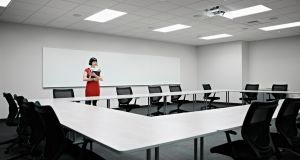 Women now hold an average of 31 per cent of board positions in Irish companies, according to a new study by accountancy firm EY.

Artificial intelligence (AI) is going to be used increasingly both to initiate and defend against cybersecurity attacks. Charlie Taylor has the details.

A one-time senior Bank of Ireland executive, Nick Fahy, is working on a plan to float the former UK unit of Bank of Cyprus on the London Stock Exchange in three years’ time, writes Joe Brennan.

Irish Tatler has launched “a new editorial direction” that includes a refreshed design, a celebrity-free cover and a greater focus on digital content in a bid to combat the loss of revenue to tech platforms such as Instagram, reports Laura Slattery.

As much as 10 per cent of the world’s wealth will likely be stored on blockchain technology by 2027, according to a new report from networking giant Cisco, writes Charlie Taylor.

Women now hold an average of 31 per cent of board positions in Irish companies, according to a new study by accountancy firm EY, writes Laura Slattery.

In her weekly column Karlin Lillington says that a debate is required around a Chinese company’s plan to use Irish DNA for private profit.

John Holden tells us that it’s no simple task trying to understand the impact of a newly-introduced drug’s by-products created through human waste.

Olive Keogh finds that payments app Zazu could make the end of a night out less hassle.

And in our weekly podcast, Inside Business, Jack-Horgan Jones looks at the impact of institutional landlords on the property market and Simon Carswell on why we may never see a report on the collapse of Sean FitzPatrick’s trial.