Keep track of your child with a V Kids watch 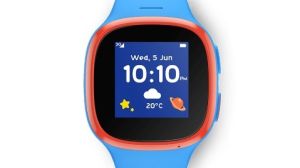 The V Kids watch is actually the TCL Move by another name. Think bright colours, sturdy design and a simple interface

All children are different. Some are inherently level headed and sensible; others are complete flight risks you can’t take your eye off for a second. If you have the latter, then anything you can use to keep tabs on them is worth every cent you spend on it just for the peace of mind.

So a little bit of technology here can go a long way. Enter Vodafone, waving its V-sims and offering trackers for everything from your pet to your elderly family members and children. It sounds like a nice neat solution in a form your child won’t immediately lose. For at least 10 minutes anyway.

The V Kids watch is actually the TCL Move by another name. Think bright colours, sturdy design and a simple interface. Available in two colours - a red core with a pink or blue silicon strap - the watch has a companion app that lets you pinpoint its location and carry out all the set up.

There is nothing too complex about the watch, but it’s aimed at four year olds and older, so anything massively complicated would be an instant fail. You’ll probably get away with the watch for anything up to seven or eight years of age; after that, they may rebel, but again, every child is different.

To use it, you’ll need to sign up for a Vodafone V sim. That’s a special sim that allows you to connect to Vodafone’s data network, making sure you have access to a data network even when you’re out of wifi range. That’s essential for a device like this, which wouldn’t be much use if you had to stay in wifi range - or even more constricting, bluetooth range of your phone. As long as you have a half decent mobile signal, you’ll be able to pinpoint the watch’s location.

So what does it actually do? Well, there’s location monitoring, which is the primary function of the device. You can set up safe zones through the accompanying app that will trigger an alert if your child moves outside these areas. Those alerts aren’t instant though; the service checks in regularly with the watch and if it finds your child is outside the designated zone, it will then alert you.

They may not be instant, but they are easy to set up, so if you are out for the day, or on holiday, you can establish a new safe zone in a matter of minutes, giving children a little more freedom, albeit freedom that comes with a digital watchdog monitoring their movements.

If they do get into trouble though - say for example they get lost - there’s an SOS alert button on the side of the watch that when triggered will alert the parent’s app.

You can also set up a designated group to allow voice messaging to the watch; if you aren’t in that group, you can’t communicate with the watch, which should provide parental anxiety about total strangers sending your child unsolicited messages.

There’s the added advantage that Vodafone’s network is pretty strong, and it has a presence across Europe. We took the device out of the country; roaming is included in several countries in Europe, so it continued to work without costing an absolute fortune.

All of this usefulness though depends one thing: getting your child to wear it. It doesn’t stop your child from taking the watch off. The strap isn’t some sort of complicated locking mechanism that ensures absolute security.

But the watch neatly covers that age where they are too young for any sort of a mobile phone but too old to be watched every second of the day. You could argue that it’s overkill, that we never needed such technology, and sure didn’t we survive? That may be true, but it gives parents a little bit of reassurance that in turn translates into a bit more freedom for children.

The device is very simple, keeping functionality to a minimum. That is a good idea given the target market. Set up is equally simple, once you have all the relevant apps downloaded.

That proprietary charger is a pain. If you lose it - and we did - they can’t be easily replaced. And you’ll need to keep the watch regularly topped up.

The V kids’ watch is waterproof and has a battery life of up to three day. I found myself charging it after just over two though. The V Sim needs a Vodafone account to which it can bill its €3 per month fee. That can be a pay as you go sim card, so if you aren’t a Vodafone customer, you don’t have to start changing over your own mobile phone plan - just pick up a PAYG sim and keep it topped up.

Simple to use and reasonably robust; the only challenge will be persuading your child not to take it off.