Company announces three wind farms in the US and Europe 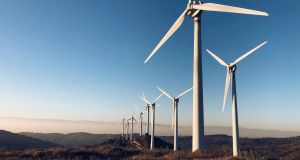 Amazon Web Services (AWS) is to invest in a renewable energy project in Ireland, committing to a wind farm in Donegal as part of its long-term goal of moving towards completely renewable energy.

The 91.2 megawatt wind farm will be developed by Invis Energy and is expected to begin providing energy by the end of 2021.

“It’s our first project in Ireland, and the unique thing is that it’s the first unsubsidised project that has been done in the country,” said Nat Sahlstrom, AWS’s director of energy.

Amazon has not put a figure on the investment, but industry sources said the typical investment would be €2 million per megawatt. That puts the Donegal wind farm in the €200 million range.

The announcement is part of a wider shift towards renewable energy, with AWS also revealing plans on Monday for a wind farm in Tehachapi, California and a third in Bäckhammar, Sweden. The three projects will total more than 229 megawatts (MW) of power, and are expected to generate more than 670,000 megawatt hours (MWh) of energy each year.

The wind farm in California will come on line next year, followed by the Swedish project. However, the company will not be completely independent in its energy requirements just yet.

“We will continue to rely on the Irish grid for energy, however, the new wind farm will help support Ireland’s renewable energy goals towards 2020 and 2030,” Mr Sahlstrom said. “We’re really excited about this new project.”

The push towards renewable energy comes as data centres and the pressure they put on the national grid come under increasing scrutiny. The number of data centres in Ireland has increased significantly over the past few years, with almost 50 now operating in Ireland. AWS did not provide details on its exact energy usage in Ireland, but said the Irish wind farm was “sizable” and would play a significant part in helping it achieve its long-term goal to power its global infrastructure completely with renewable energy.

“The renewable energy projects that AWS enables are well positioned to serve AWS’s data centres. In addition, our data centres are focused on running in the most environmentally way possible, and our scales allows us to achieve higher resource utilisation and energy efficiency than your typical on-premises data centre,” Mr Sahlstrom said. “When we make the investments in these wind projects, and they produce lots of power, that’s a net positive for the grid.”

The company said it achieved 50 per cent renewable energy for its global infrastructure in 2018. It has enabled a total of 53 renewable energy projects worldwide to date, producing more than 1,016 MW across wind and solar power.