MacKenzie Bezos gets $35bn worth of Amazon stock in divorce deal 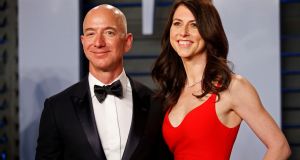 MacKenzie Bezos will retain Amazon stock worth more than $35 billion (€31 billion) after her separation from its founder and chief executive Jeff Bezos, in what has been billed as the biggest divorce settlement ever.

Ms Bezos’s 4 per cent stake in Amazon after the settlement is finalised – a quarter of the couple’s collective holdings – will probably make her the world’s third richest woman, after Françoise Bettencourt Meyers, the L’Oréal heiress, and Alice Walton, the daughter of Walmart founder Sam Walton, according to Forbes’s estimates of their net worth.

In a statement posted to Twitter on Thursday, Ms Bezos said she would hand over all of her interests in the Washington Post newspaper and Blue Origin, Mr Bezos’s rocket venture, as well as all voting control of her remaining shares in Amazon.

“Happy to be giving him all of my interests in the Washington Post and Blue Origin, and 75 percent of our Amazon stock,” Ms Bezos said in the tweet.

The couple filed a petition for divorce on Thursday, according to an Amazon regulatory filing, and expect the settlement to be confirmed by decree in around 90 days.

“Grateful to have finished the process of dissolving my marriage with Jeff with support from each other and everyone who reached out to us in kindness, and looking forward to next phase as co-parents and friends,” Ms Bezos wrote.

The details resolve questions of both governance and ownership that have hung over Amazon shareholders since the couple announced they were divorcing in January, as well as speculation about how it could affect the pair’s philanthropic efforts. Many lawyers had anticipated that the particulars of their separation would be kept private under local laws in Washington state, where the family home and Amazon’s headquarters are located.

According to Factset, Mr Bezos’s current 16 per cent stake in Amazon is worth $143 billion, making him the world’s richest man. He will hold 12 per cent after the divorce is finalised, worth around $107 billion.

Mr Bezos said in a tweet that he was “grateful to all my friends and family for reaching out with encouragement and love. It means more than you know. MacKenzie most of all.”

The agreement makes it the most expensive divorce on record. Oil industry magnate Harold Hamm was ordered to pay Sue Ann Arnall $972 million of his then-estimated $16.1 billion fortune in 2014 after a two-year trial. Mr Arnall later sought to reopen the case but the Oklahoma Supreme Court dismissed the appeal in 2015.

The Bezos agreement, reached within three months of the announcement that the pair were divorcing, suggests it was an amicable separation.

“It’s a win-win,” said Jennifer Payseno, a partner with McKinley Irvin in Seattle.

“Any time you can really work through things and reach an agreement you are far better off than if you’d gone to court and into litigation or arbitration.”– Copyright The Financial Times Limited 2019/Reuters