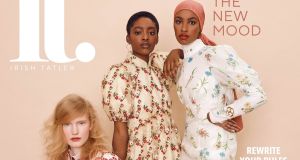 Irish Tatler has a new look, starting with its May 2019 edition.

Irish Tatler has launched “a new editorial direction” that includes a refreshed design, a celebrity-free cover and a greater focus on digital content in a bid to combat the loss of revenue to tech platforms such as Instagram.

The May edition of the women’s magazine, showcased to key advertisers at an event in Dublin on Wednesday and appearing on shelves on Thursday, has a new “it” logo, more feature articles and replaces the usual celebrity cover star with a trio of fashion models.

Irish Tatler, which began life in 1890 under the name Lady of the House, has been owned since late 2017 by media group Irish Studio, the company founded by Irish-American businessman Liam Lynch and owned by US venture capital fund StudioVC.

Although it has since stopped printing some titles acquired from publisher Harmonia, Irish Studio has decided to maintain and revamp the monthly Irish Tatler under a new team of editorial director Ellie Balfe, magazine editor Sarah Macken and IrishTatler.com editor Amy Heffernan.

The brand U, which came to the end of its life as a monthly print magazine last summer, will now also cease as a digital brand as Irish Studio concentrates on “uniting” behind Irish Tatler.

“It has been an extraordinary time for women in Ireland coming together and making changes, and that really inspired me when we were developing the manifesto for this brand.”

The magazine, which has a core staff of nine, will give space to topics such as work, money, politics, sustainability and wellbeing, alongside lifestyle, fashion and beauty content.

Ms Balfe, who joined in February, was previously digital director at rival Image Publications and was the launch editor in 2013 for Image.ie.

“I think there is a lot more to be said with your cover,” Ms Balfe said of the decision to eschew celebrities. “We see it as a place at the table for all Irish women.”

An inclusive, open, non-preaching tone is vital to readers today, she added. “There should be no ‘should’,” Ms Balfe said.

Irish Studio remains in the market for further acquisitions, while it also plans to add to an events strategy that includes the Irish Tatler Woman of the Year reception, Ms Molony said.

In light of a difficult market for print, the aim of the revamp is to try to maintain rather than grow Irish Tatler’s print circulation and pursue a “digital-first philosophy”, she said. However, print is still an important medium for many brands “that want to sit in that premium space”.