Cisco says €8.9tn of global GDP could be on blockchains within 8 years 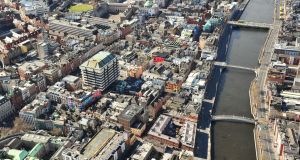 The report suggests that individual cities, such as Dublin, could make huge gains by using blockchain to create a secure and common ledger to manage real-time data around areas such as transportation, energy and utilities

As much as 10 per cent of the world’s wealth will likely be stored on blockchain technology by 2027, according to a new report from networking giant Cisco.

The company, which has developed its own blockchain platform, forecasts that as much as $10 trillion (€8.9 trillion) of global GDP will be on blockchains within eight years. Currently, global GDP is valued at about $80 trillion.

Cisco also said it expects the blockchain market to be worth $9.7 billion by 2021.

The company said in its report that while blockchain technology had the potential to transform the business landscape, important challenges to wider adoption remain, including a need for standardisation.

“Blockchain has the potential to change the rules by automating trust, increasing transparency, and simplifying business processes. However, to unleash its full potential, it needs to be based on an established set of standards that meet the complex needs to the enterprise,” it said.

The report’s publication coincides with the coming together of more than 100 organisations to promote a global framework for the development of the technology. The International Association for Trusted Blockchain Applications (INATBA) is intended to be a platform for organisations to interact with regulators and policymakers on issues related to blockchain technology.

Well-known companies including AB InBev, Accenture, BBVA, Barclays, IBM, Deutsche Telecom, SAP, Repsol and Telefonica last week pledged to support blockchain technology by working to develop a “predictable, transparent and trust-based” framework. The new initiative also has the backing of international organisations such as the European Commission, the World Bank, the OECD, the UN World Food Programme, Unicef and the European Investment Bank.

In its report, Cisco said there was a huge opportunity for companies that turn to blockchain.

“Traditionally, institutions such as banks, governments and corporations have played the role of managing risk to facilitate trade and commerce. Now, for the first time, organisations can use technology to manage this risk to lower uncertainty and reduce everyday transaction costs of doing business,” it said.

The company stressed however that it isn’t just big businesses that stand to benefit from the technology. It suggested that individual cities could make huge gains by using blockchain to create a secure and common ledger to manage real-time data around areas such as transportation, energy and utilities.