AI predicted to be used more to defend against cybersecurity attacks 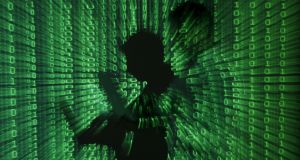 “We’ve seen a significant shift in thinking on cybersecurity over the last few years, with organisations prepared to ‘hand over the keys’ to the AI and allowing it to make the critical decisions and take action where necessary.” Photograph: Getty Images

Artificial intelligence (AI) is going to be used increasingly both to initiate and defend against cybersecurity attacks. That is according to Emily Orton, co-founder of Darktrace, a cybersecurity “unicorn” whose revenues almost doubled last year on the back of increased concerns over sophisticated security threats.

Speaking on the sidelines of the Dublin Tech Summit at the RDS, Ms Orton said that about 3,000 organisations globally were now relying solely on AI to protect them against cybersecurity attacks.

“Cybersecurity is now one of the widest uses of AI in the enterprise space, and we expect adoption to increase dramatically. The catalyst for adoption is strong, with many organisations having little choice but to adopt AI because threats are becoming more sophisticated and so fast to deploy that humans simply can’t respond in time to attacks.”

Created by mathematicians at Cambridge University, Darktrace has developed sophisticated technology that is self-learning and which can identify threats in real time and immediately fight back against them.

Darktrace, which recently set up a sales-focused operation in Dublin, posted a 98 per cent jump in annual revenues to £59.4 million (€69m) earlier this month.

The company’s backers include Irish-born Michael Lynch, who stepped down from its board late last year after being charged in the US over the $11 million sale of his software firm Autonomy to HP in 2011.

“We’ve seen a significant shift in thinking on cybersecurity over the last few years, with organisations prepared to ‘hand over the keys’ to the AI and allowing it to make the critical decisions and take action where necessary,” said Ms Orton.

She said another key reason why more organisations were adopting self-learning cybersecurity platforms was the increased use of AI by cybercriminals. “We’re looking at a case of AI versus AI in the future,” said Ms Orton.

“The positive in this though is that through using AI organisations can get on the front foot and have complete oversight of their system so that they are better prepared if and when attacks take place.”

The event continues on Thursday.