Rates remain at record lows, with monetary stimulus in place 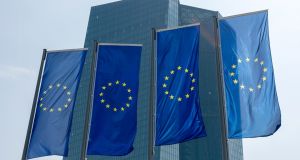 The decision to leave policy unchanged was widely expected after the bank unveiled new stimulus measures at its March policy vote. Photograph: EPA

The European Central Bank (ECB) has left interest rates on hold at record lows and reiterated its commitment to keep monetary stimulus in place until the region’s economic slowdown reverses course.

In its latest monetary policy announcement on Wednesday, the bank’s governing council kept its benchmark main refinancing rate at zero and its deposit rate at minus 0.4 per cent.

The council said it expected to keep official borrowing costs for the region on hold “at least through the end of 2019”.

The 25-member body also said it plans to reinvest bonds maturing under its €2.6 trillion quantitative easing programme “for an extended period of time past the date when it starts raising the key ECB interest rates, and in any case for as long as necessary to maintain favourable liquidity conditions and an ample degree of monetary accommodation”.

The decision to leave policy unchanged was widely expected after the bank unveiled new stimulus measures at its March policy vote.

Wednesday’s announcement came amid signs that the euro zone is still struggling to recover from a slowdown that started in the second half of last year.

On Tuesday the International Monetary Fund became the latest organisation to cut its 2019 forecast for growth in the region – bringing it closer to other estimates, including the ECB, which now forecasts an expansion of just 1.1 per cent.

The central bank’s policy-makers think growth is more likely to miss that target than exceed it, warning that risks to the outlook have “moved to the downside”.

Wednesday’s meeting follows the news that one of the risks that most worries the council – an intensification of the global trade war – is in danger of being realised.

US president Donald Trump threatened on Tuesday to impose tariffs on $11 billion (€9.8bn) worth of European goods exports, in a significant worsening of trade tensions between Washington and Brussels.

ECB president Mario Draghi has so far insisted that the euro zone’s return to stronger growth has been “delayed” rather than “derailed”.

The ECB is already planning a series of auctions of cheap central bank cash – known as targeted longer-term refinancing operations or TLTROs – in an attempt to stave off credit shortages.

The bank could also switch to a tiered system for its negative rates policy, a move that would alleviate pressure on the region’s lenders which are paying €7.5 billion a year to central banks in the euro zone in exchange for holding their assets on deposit.

A tiered system would pave the way for the ECB to strengthen its forward guidance on interest rates and extend its commitment to keep rates on hold until 2020. – Copyright The Financial Times Limited 2019